The enduring image of Bersih 3.0 as life goes on

After all the commotions over the past week, things do not seems to change much for most people in this country. Life still goes on and it's back to the grind for everyone.

The ordinary folks looked back at what happened wondering whether it was all worth it - the injuries, damage to property, disrupted businesses, tarnished image of the country etc.

The rioters went back to their normal life too albeit a probable sense of pride that they had achieved something -  managed to throw a rock and almost killing a policeman, kicked an injured traffic policeman, shouted obscenities at policemen etc.

The policemen, many of whom were from outside KL had gone back to their routine of patrolling the neighborhood, trying to catch criminals, saving lives (of some who maybe had shouted obscenities at them or had even assaulted them during the riot).

The politicians on their part are counting the scores. Was the whole thing beneficial for their efforts to gain or maintain power? Those were up to each of their own interpretations.

The injured, some still in hospital, will take some time to recuperate from the cuts and bruises as well as the emotional trauma.

Me, I looked at the violence of the riot with disbelief. Being a veteran of the riots of the Reformasi era in the late 1990s, I found that the carnage this time was unbelievable. It was definitely much worse than those during the height of Reformasi.

The rioters were definitely out for blood this time.

Yes, the police may had rough up a few defiant rioters who broke the barricade at Dataran Merdaka and in the process some, including journalists were caught in the melee. But what beggars belief was the ferocious violence committed by the rioters on the policemen and those who stood in the way of their rampage.

The incident where a police car was pelted with objects and later on the injured policeman beaten by the mob and the car toppled over will forever be the enduring image of the so-called Bersih 3.0 "peaceful demonstration". 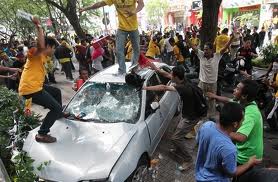 Back during the riots of the Reformasi era, it was the FRU chasing down the rioters, but this time, it was the rioters who charged the police line as can be seen at Dataran Merdeka and near the KLCC.

Has the government's softly softly approach to appease these criminals failed? Was it the case of the government being tolerant and ended up emboldening those who were bent to break the laws for their own selfish political agenda?

Maybe not. Maybe all the carnage last week taught us peace-loving Malaysians an important lesson.

Maybe we learned that those who claim to know the laws but went hell bent to break them have no place as opinion leaders for us all.

Maybe we learned that self-proclaimed leaders who were willing to instigate the people to break the laws need to also be rejected as they will bring nothing but destruction upon our beloved Malaysia.