Smart people tend to get arrogant.

When they get arrogant they tend not to be smart anymore.

It's always like that...especially among Malays. It's my personal observation of my own race.

Malays tend to lose their head once they attain a certain level of success.

Some time, they only think they are smart and already they become so arrogant. Know some Quranic verses, and already want people to call them ustaz. Already want to have a new wife. Give counseling to other people's wife some more. At 3am in a hotel room some more. 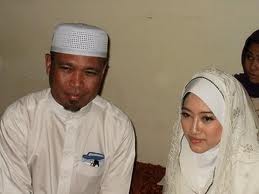 Don't know lah why my race like that one. The really good and smart Malays somehow were never really appreciated.

Ok, I know I'm more venting than anything else here, but really la, why do Malays always find it hard to be smart and successful without getting arrogant and stupid in the end?

Other examples that I know -

Malay boy from a poor family. Study hard and become smart. Given scholarship by the Malay-led government mainly because he is a smart Malay. Came back from some US university. Got nice high ranking job in some GLC. Start thinking he was so smart that he was better than those of the Malays running government. Want the Malay-led government to be toppled. Replaced with anything also, he don't mind.

Malay boy from a poor family. Relatively good in his studies. Got into university but basically due to the Malay quota. Got a study loan some more. Later on think so highly of himself. Mahasiswa la katakan. So clever that he think everyone must listen to him including those Malays in the government who made it possible for him to get into university and be financed with a study loan. Go around kicking traffic policeman to show off himself as being smart.

Malay boy from a relatively rich family. Not so smart but family rich enough to finance his studies overseas. Came back smart and became part of the Malay liberal elite. Want the Malay-led government replaced. No class la Malay kampung party leading the government. His smartness made him forget that his family became rich and can finance his studies to be smart because of all those government contracts given out to help the Malay companies such as his family.

Malay girl, daughter of a former PM. Silver spoon fed from a baby till an old lady. Became so smart, but now want to become so cool...and end up became so stupid.
Eh, I think you all know the story of this last example of stupidly arrogant Malay lah.

Ok. Cheers everyone...especially you all Malays.

Someone commented here that 10,000 people turned up at a Pakatan demo at Plaza Angsana in JB last  Saturday.
This is the picture of that gathering I took from 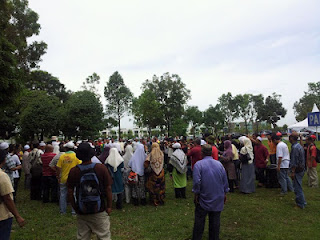