A towering Malay's fistful of ringgits

I do wonder what went through Guan Eng's mind when he decided to offer Tunku Aziz that RM50k a year job as "compensation" for not extending the latter's senator-ship following the DAP's Bersih row.

Would he had made the offer if Tunku Aziz was a respected "towering" Chinese or Indian?

Somehow, I suspect that  he would not dare to make that offer if not because Tunku Aziz is a Malay.

Anyway, I think RM50k a year is rather stingy leh. That's just over RM4k a month. What la you Guan Eng, want to bribe, bribe properly la. Tunku Aziz is a towering person, ok?

Maybe to Guan Eng, Tunku Aziz's towering is just of the Melayu variety only...but still la Mr Chief Minister, the guy is still towering, ok? You all DAP people who gave him that label, what. Whatever it is, his honor and dignity should worth more than that, I think

I wonder how much is the price of honor and dignity of these other DAP's towering Malays in this picture here with Guan Eng.. 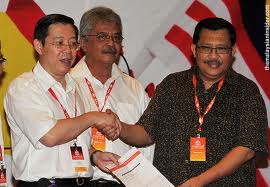 This whole thing actually reminds me of an incident several years ago. A good friend, who works for a rich towkey called me up just a few days before Hari Raya asking for my bank account numbers. He said his towkey wants to give me duit raya. I tried very hard not to get angry as I didn't want to lose a friend just because he went stupid for awhile. I politely told him I can't do such a thing, upon which he immediately said the money was not a bribe. Just duit raya, what, he said. Furthermore, he said his towkey will get angry if he fails to give the money to me. At that point, I lose my patient and quietly told him to bank in the money into his own account. I then hanged up.

A bribe is a bribe, ok? I don't think the towkey would want to simply simply give me duit raya if not because of my professional position. And being offered a bribe while fasting during Ramadhan, was actually quite insulting.

However, I tried to reason with myself that the towkey and my friend (who happened to be an Indian) didn't mean any harm as they may had thought it's normal for Malays to receive such "gifts" due to their duit raya tradition. After all the towkey and my friend are really nice people. They may probably be just mistaken about the Malays' tradition and their sense of values. Maybe, they have come to believe that the Malays had developed a sense of justification for that sorts of things and accorded a certain degree of acceptance to the culture of corruption.

Well, my friends, you all got it wrong, ok? Only corrupted Malays are like that. Not all Malays, ok?

Anyway, what is this duit raya thing in the first place? Where did the Malays learn to give money to the visiting  children (and later on adults) during Hari Raya? I do believe the Malays, at one point in time adopted this "tradition" from somewhere, probably from the ang pow giving practice during Chinese New Year or giving of gifts during Christmas.

By the way, I never give duit raya during Aidil Fitri celebrations because I don't believe in the practice. I think it teaches kids to be materialistic. That's why I am not a big hit among my nephews and nieces.
Posted by BIGCAT at 12:07