I have always considered myself a leftist during my youthful days.

In college, I read Marx and Engels. Some of my friends even believed that I was a communist. Well, I am not and had never been one. Being a Muslim, I can't accept the atheism of the ideology.

Still, being a youth from a poor working class family, I was at that time attracted to the concept of socialism. At one point, I considered myself a Muslim socialist. 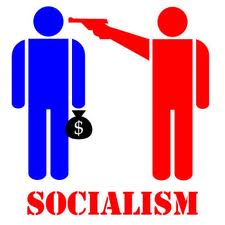 I used to argue something like this (courtesy of Wikipedia) -
Islamic socialism is a term coined by various Muslim leaders to describe a more spiritual form of socialism. Muslim socialists believe that the teachings of the Qur'an and Muhammad are compatible with principles of equality and the redistribution of wealth drawing inspiration from the early madina welfare state established by Muhammad . Muslim Socialists are more conservative than their western contemporaries. Islamic Socialists found their roots in Anti-imperialism. Islamic Socialist leaders believe in Democracy and deriving legitimacy from public mandate as opposed to religious texts or claiming to be successors of the Prophet's companions.

Of course, these sorts of thinking was rather unusual for a Malay youth back then. I am not very sure about now, but at that time, most young Malays were either with Pas or Umno. I don't really like Pas due to its fanatical Islamic views while Umno, to me, was rather feudalistic and ideologically wishy washy. In the end, I became rather disinterested to be on either side and opted not to be involved in anything political. I even refused to be registered as a voter.

It was around this time that I met a close friend, a young Chinese guy, who was my classmate. He was a member of Dapsy and very passionate when it came to politics. He was always going around talking with anyone who care to listen about the virtues of DAP. So passionate he was about the whole thing that most of my friends tried to avoid him whenever he approached them to talk about politics. Too heavy stuff lah, they would complained. After all, we were at that time still at the age of enjoying our young life. What to wear to a party was more important and fun than discussing about the oppression of BN. Anyway, most of my classmates were rich kids whose idea of oppression was when their parents refused to buy them a car or grounded them a week for getting piss drunk during a party.

I always pitied my friend and tried to layan him whenever he went on his political rantings. His biggest hero at that time was Lee Lam Thye (whom he later on denounced as the most corrupted man ever, after Lee left DAP). He was so shocked when I told him that I was not a registered voter. My defense was that this country is a democracy which allows me to choose not to choose.

When I told him of my socialist leanings at that time, he immediately wanted me to join Dapsy. It's socialist what, he said. I must be a good catch, I guess, to bolster the DAP's Malay ranks. Well, that's not how I see the DAP's youth arm. It's just socialist by name. Even back then, I considered DAP as a parti anak beranak and more feudal (the Chinese version) and racially chauvinistic than Umno.

DAP have never been what they claimed themselves to be. Multi-racial? It's a Chinese party with the non-Chinese being mere window dressings. Democratic? I can't even remember when was their last party elections. Tell that to Lee Lam Thye, Wee Choo Keong, S K Song, etc and they would probably have a good laugh. Promoting freedom? Just look at how they banned newspapers in Penang whose editorial policies do not support their cause. A lot of other examples lah.

It's the same as their Pas and PKR partners. Say one thing, but the reality were another. Their hypocricy was what put me off from supporting them. I was not at all surprised by what happened to Tunku Aziz Tunku Ibrahim, who has now joined a long list of illustrious former DAP leaders. The man joined DAP probably believing that he was doing something good. Now he knows that he was just being silly. Tunku Aziz is a typical smart Malay whose judgement was clouded by his self-righteousness and lack of grassroot knowledge. It's a normal syndrome afflicting a lot of idealistic Malay elites. It's the same "illness" affecting a daughter of a former PM who has now gone totally stupid with her support for those Bersih rioters.

The same, however, cannot be said of some other Malays who joined DAP. They did so purely due to selfish reasons. These are the types who failed to further their political ambitions on the usual Malay political platforms. The most famous at the moment are ex-Umno leaders Aspan Alias and Mohd Ariff Sabri.

I am not familiar with Aspan, but I indeed do know quite a bit about Ariff.

Ariff was the former one-term Umno assemblyman of Pulau Manis (2004-2008), and Pekan Umno division information chief. He was dropped from being an assemblyman due to his poor performance. I remember at that time aides of PM (DPM then) DS Najib Razak used to complain to me how Ariff gave their boss a headache as people of Pulau Manis were so unhappy with his performance as a wakil rakyat back then. On the night before the 2008 polling day, Najib spend the last hours of campaigning in the area in a last ditch attempt to sway voters there back to BN. Fortunately, they did and Najib recorded the highest majority among BN candidates in that general election.

My friends in Pahang told me that Ariff was very bitter about the whole thing and that was why he started to attack the Umno establishment in his blog. One of his main target was Najib himself. It was his final act of betrayal when he joined DAP after achieving so much in his life courtesy of Umno.

I was a bit sympathetic when Tunku Aziz realized what DAP really stands for. Well, everyone has to go through such an education. I went through the same thing when I shed off my socialist idealism. But if people like Ariff and Aspan suddenly declared they found out that DAP is a chauvinistic autocratic party, I would not even spare a spit of words for them.They are just opportunists with not a bone of conscience in their body.

The Malays, especially those in Pas and PKR should know what DAP really is after the Tunku Aziz episode. DAP have not and never will work for the Malays' interests. The Malays should also know by now what kind of people among them who are within that party's ranks.
Posted by BIGCAT at 16:06