A little chirpy bird and the IIB-gate

When I read what rockybru posted in his Friday intermission, I was kinda curious about how such a story could be leaked from a supposedly highly confidential board meeting.  So I began digging around, but in a leisurely manner, you know, it was a Friday after all, and a long weekend at that.  But when A Voice posted this, my digging became a bit more urgent as I see that the speculative nature of that piece will adversely affect the diligent work done by BN Johor to ensure BN victory in the coming election.

After a bit of arduous digging, I got access to a little chirpy bird. 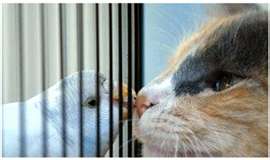 This little bird (who does not represent KPRJ, by the way) told me that the matter on how to handle the "IIB-gate" was indeed discussed in the board meeting and that it was an open discussion, more in the nature of "how do we handle this?... if we do this, what will happen? ... if we do that - what will be the implications?" etc.

Apparently it was an open discussion, but what was minuted was that the final decision was made unanimously, with no one dissenting.

Turned out the KPRJ representative was not the only one who had reservations about the option of making a police report, there were 2 or 3 others (the little bird couldn't remember the details as it wasn't minuted, more of a discussion, and it wasn't that recent, etc.) who shared the same concerns.

Mostly these people were concerned about how such a decision will affect IIB day-to-day operations, the image thing, etc. ... probably because these people were not involved in the operational management and decision-making within IIB.

It was therefore strange  when the story that came out in rockybru's was very particular about the representative of KPRJ, and of him being a representative of the Johor State, or probably in this case Johor MB, I suppose.  What about the other board members who shared his concerns?  Why no mention of which organisations they represent?  Was it because they are all based in KL? What about the board member who was adamant about not involving the MACC?  The way it was worded looked like it was also made by the same KPRJ rep, as there were no other board members identified, wasn't it?  In fact, A Voice more or less stated in his article that it was so.  Was it?

What got me curious was, that the Haji Johar Salim that I had the pleasure to have encountered, does not at all reflect the corporate shark potrayed here.  Maybe my gut feel is wrong, for once, but it just felt wrong.


Further on, in his article, A Voice then linked Johar Salim with Lim Kang Hoe, and then to Abdul Ghani Othman.  Aha!  That was just too convenient guys, but all the same, very revealing.  They will then link this with the Utusan and Berita Harian story, and people will jump immediately and say ya la, that must be true, so and so is an Umno politician, so he must be corrupt, kan?  Then people will begin to demand for independent audits of these Johor institutions.  So the corruption matter will stay in Johor and the "corrupt" Johor politicians/state GLC heads/IIB rogues/etc., and will not touch any of the "pristine" pure-as-snow Khazanah people in KL kan?  Can you people who leaked and spun the confidential board meeting discussions be a bit less obvious?

And another thing, if you do a bit of proper digging, you would know that Dato Lim Kang Hoe serves a different political master/partner lah, definitely not a Ghani Othman proxy.

As for the Kulim Board appointments, you should read Benchmark and make your own conclusions.  I have sorta made mine.

In the matter of QSR and KFC being sold to CVC, and being backed by CIMB Investment, which is deemed to be bad news by A Voice, I was planning to write about the rationale of that move (my own speculative insinuations will be at work here, hehehe), but I must first confirm some of my facts with sources within JCorp and of course PMO.  After all, CIMB Investment is controlled by you know who.  In short, I personally think the move is a sensible one for JCorp in the long run and should have been done a long time ago, but what do I, a curious cat, know about corporate wheeling and dealing?

For example, if I were an ambitious person in a position of decision-making for a GLC investment arm, I would structure all the investments in such a way that if I were kicked out of the GLC, I can still be in control within the public-listed entity that control all the businesses, provided I fight tooth and nail to stay in control of the public-listed entity of course, or keeping it intact while I fight to get control.  I don't have to worry about liabilities, because the investments were made by the GLC, which will have very little benefit from its investments because the corporate entity will be under my control.  Hmmm ... maybe I should not write about it as my tiny brain is incapable of thinking of all that complicated corporate stuff.

Instead, maybe  I should complete that little article I was working on about KPRJ and its role in fast-tracking rural development as well as the many social projects it does for the public and how their assets have now grown to billions over the last few years, while maintaining a very low operating cost and a very small team.  However, if I were to write about this, I may be accused of being a mouthpiece of whoever.  Hmmm ... maybe I should not finish that article after all.

Personally, I feel sorry for poor Haji Johar Salim and the few (about 12 I think) KPRJ staff in general - never mind guys, KPRJ may not have huge sophisticated offices, or super duper vice presidents running around earning 5-6 digit salaries, or massive PR budgets to waste on newspaper pull-outs, or multi-million ringgit consultants producing impressive-sounding blueprints, but KPRJ has done good for many ordinary folks in Johor and I for one have no major complaints about KPRJ.

In any case, I am going to sit back for now and see how this whole thing unravels, unless of course I come across more insinuations/speculations/etc. that perk my curiosity.  Eh, what exactly did they say about curious cats?
Posted by BIGCAT at 18:46