It is exactly two years today since I found myself shedding tears in front of the Puteri Specialist Hospital, Johor Baru.

I had rushed to the hospital that morning upon hearing that Sultan Iskandar Sultan Ismail was admitted during the night.

It was not the first time that the sultan was warded at the hospital. Still my anxiety upon hearing the news was real.

The first thing that I was told as I reached there was that the sultan was gravely ill.

I had immediately send several text messages to those I deemed needed to know.

Admittedly, I was emotional at that time. One of the text messages read something like this, "Let's pray the old man survive this. Johor still badly needs him."

When I got the information that MB Datuk Abdul Ghani Othman had chartered a flight to immediately return from accompanying PM DS Najib Razak in India, my heart sank. I knew at that point that there was not much hope left.

About 7pm, as Ghani arrived, my fear was confirmed.

Ghani was wearing the songkok with the strip of white cloth around it. He was already in mourning. The good old man of Bukit Serene, as I fondly called the Sultan among friends, was no more. I recited the Al-Fatihah for my beloved Sultan at that moment with tears in my eyes. Yes, I cried, and I'm not exaggerating it.

Some may think I must be some sorts of a royalist for shedding a tear for the Sultan. Well, the truth is, I am not.

I never had any personal engagement with the Sultan, never even got to shake his hand, let alone received anything directly from him. 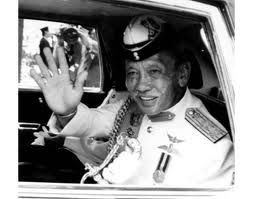 But I do love Sultan Iskandar as if he was my own grandfather or someone like that. To me he was a good man in his own way and had kept Johor safe during his reign.

True, I had heard a lot of nasty things about him being a garang man. When he was young, he even lost his position as the Tengku Mahkota to his younger brother Tunku Abdul Rahman because of his temper.

But stories I heard from people I trust, made me believe that Sultan Iskandar was actually a kind person even during those time. He sincerely love his subjects and went to great lengths to do the best for them....of course, in his own way.

In an incident, related to me by my father when I was a teenager, Sultan Iskandar, who was then the Raja Muda had landed his helicopter near our home, which was a unit of delipidated laborers barracks. This was in the mid-1970s.

Upon making some inquiries, Sultan Iskandar went to the office of my father's boss and without saying anything, gave the man a tight slap.

After that, Sultan Iskandar told my father's boss that he was slapped because he let his laborers live in homes which were not even fit for animals. The next day, our barrack home got renovated, complete with a fresh coat of paint.

Sultan Iskandar did not go around slapping people for no good reason.

Nonetheless, what I love most about Sultan Iskandar was his principled way as a monarch.

HE NEVER TAKES ANYTHING FROM HIS RAKYAT.

As far as I know, Sultan Iskandar never asked the State government for anything which didn't belong to him. He may seems to be not the most friendly monarch to most people, but it is a fact that he loved his rakyat enough not to burden them with his demands.

Instead, he gave a lot to his rakyat, of which most were unrecorded. Among the few which were reported by the newspapers was when he gave his land in Bakar Batu, JB for the government to build new homes for residents of Bukit Chagar and Lumba Kuda whose home were to be demolished to make way for the new CIQ. 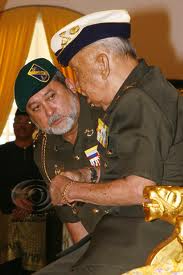 There are not many places or buildings in Johor named after Sultan Iskandar. When he launched the Iskandar Malaysia project in 2006, other than making that famous statement about the need to demolish the Causeway (and left Pak Lah red-faced), he had also suggested that the economic corridor should had been named after Datuk Abdul Rahman Andak, a 19th century Johorean nobelman who was instrumental in modernising the State. Sultan Iskandar, to me, was definitely not a glamour-seeker. Due to the lack of use of the name, Iskandar now symbolises quality and exclusivity in Johor.

And that, brought me to another Johorean man who is also not a glamor-seeker and was close to Sultan Iskandar.

It was well known almost to everyone that Sultan Iskandar treated Datuk Ghani, his longest serving MB like a member of his own family. He snubbed Pak Lah twice, in 2004 and 2008, when the then PM tried to replace Ghani with someone of his choice. That, to me was the most wise decision by Sultan Iskandar, as I suspected that he knew how much the Tingkat Empat boys at that time had greedily eyed Johor and looking for a foothold. By keeping Ghani to keep the wolves at bay, Sultan Iskandar probably prevented Johor from being sucked dry by those leeches.

The Sultan and his MB shared many common traits. They are men of integrity and honor. Of course Ghani does not slap people even though sometimes I feel that he should when it comes to dealing with some people.

When Sultan Iskandar bestowed Ghani the highest Johor honour, the Darjah Kerabat 1, many had puzzeled over it as the award was rarely given to a commoner. It technically made one a part of the royal household. 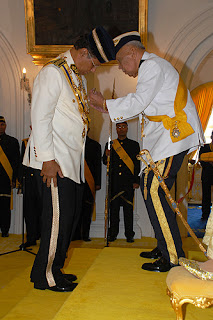 The story that I heard was that when Sultan Iskandar was about to undergo an operation in Bangkok in 2003, it was Ghani who actually contributed his own blood for the operation as the sultan's blood type was of a rare type, which is the same as Ghani's.

However, I'm more inclined to believe that Sultan Iskandar appreciated Ghani simply because he was a monarch who was a good judge of character. He always wanted the best for his subjects and as for leadership, he would had wanted someone who is good to lead Johor, instead of someone who would only be good at saying YES to all his whims and fancies.

The last time I saw Sultan Iskandar was at the opening of Kota Iskandar, the new State administrative capital of Johor on March 16, 2009. He looked frail but was in jovial mood. In his speech, he had cracked jokes and pretended to be crossed with the speech he was supposed to read as it contained several "big Malay words". That was a good day, except that it was also the last time I ever saw Sultan Iskandar in person. 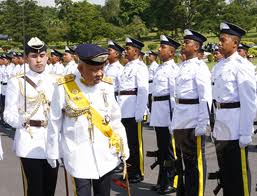 I will always miss that good old man of Bukit Serene.


(Note: Dear readers, please be careful not to make any seditious comments)
Posted by BIGCAT at 15:52