Met an old friend I haven't seen for a long time last night.

We hanged out over a few drinks and mostly talked about our "old war stories".

He is by the way my senior and mentor. A really cool dude, who takes no bullshit from anyone.

He was with me at No8, Jalan Setiamurni, Bukit Damansara when Anwar Ibrahim was arrested that tense night on Sept 20th back in 1998.

I was a Reformasi sympathizer at that time while he was, and still is a pro-BN guy. 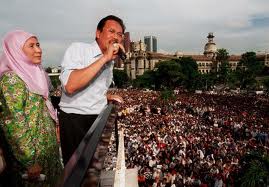 At that time, I had wondered why my senior, who knows so much more than me and never compromised on his principles could be so sure that Anwar was not innocent.

I never asked him what were his reasons to take such a stand at that time as I did not want to offend him.

Whenever people asked me why I was sympathetic to Anwar at that time, I always said that the case against him was so poorly handled that it smells a conspiracy from the start.

I was young and rebellious. I was ready to side with anyone who was deemed to be victimized.

The image of Anwar, his soft-mannered wife and young children being victimized really didn't go down well with me.

The funny thing about it all was that I didn't even like Anwar previously. I encountered him several times before he was sacked from his DPM post and find him to be arrogant to those whom he can be arrogant with. His young aides and even his bodyguards were the same. Anwar was at that time at the pinnacle of his power.

But I brushed aside all negetive thoughts about Anwar after I went to his house a day after his sacking. On that day the house was packed with his supporters. But what caught my attention most was the sight of his daughter Nurul Nuha, then 14 crying at one corner and was being consoled by Wan Azizah. That was the turning point for me at that moment.

Now, I'm much older and more objective. I do not let my emotion rules my thinking anymore. Post 2008, I realized that this country is in danger of falling into the hands of hypocrites.

My friend finally told me last night why he was so sure that everything are not right about Anwar.

He was closely involved in the Anwar's case since a year before his arrest. He saw with his own eyes when Anwar abused his power by ordering the police to arrest and harass Umi Hafilda and his driver Azizan to retract their allegations of his sexual misconducts. Anwar was later convicted for that but many, including me at that time believed that it was just part of the conspiracy against him. My friend nonetheless told me how the policemen who had to execute Anwar's orders agonized over what they had to do.

Knowing my friend and what he stands for, I know he was not lying.

"Do you think the same thing will not happened again if that bugger really becomes a PM?" my friend asked.
Posted by BIGCAT at 17:05