I would just quit if I'm Ghani

Had dinner with a good friend who is a journalist last night.

He told me about his meeting with KL-based Johorean blogger BigDog earlier in the day.

Asked me what I think of Mr Bigdog's latest posting.

It's a bit long, I think. But I don't want to comment on it. I think I know where it was heading, but let it be lah.

I am honestly still in CNY mood. No energy to call up here and there to check on other blogger's postings or spend time doing research. BTW, I think I ate too many mandarin oranges. Caused extra gas in my tummy liao.

Well, even if I try to give my view, most likely BigDog will have his own take on it. No point going ding dong with him.

As far as I am concerned, pro-Umno KL-based Johorean bloggers like BigDog and A Voice had made up their mind that Johor MB Datuk Abdul Ghani Othman need to let go off his post ASAP. Based on their postings on Johor, I don't think they like Ghani too much anyway.

So, no point in arguing about that. After all, these good fellas want the best for their party. So, if they feel that Johor Umno will be better off without Ghani, then so be it. I am not even an Umno member, so, why should I be bothered too much. Let them be happy with the likes of Khaled Nordin or Osman Sapian as Johor MB.

By the way, heard Ghani was under pressured by his family members to quit as MB too. They were said to be tired of being slandered because many Umno people think Ghani wants so much to cling on to the post. My sources in PMO had even confirmed that Ghani had conveyed the message about his situation to PM DS Najib Razak. The PM was however said to be quite unhappy about it. 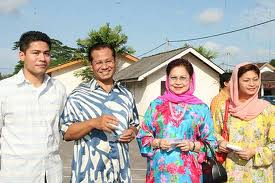 Actually, if I am Ghani, I would quit too. Being Johor MB is definitely not a walk in the park. And the slanderous and libelous stuff one needs to endure is great. And the family have to suffer along.

If Ghani is reading this, here is my message to him -

Datuk, I think you just quit lah. No point continuing sacrificing for all these ungrateful people. You are 65 already. Time to have a time for yourself and your family. Enough la those 16 years as MB, juggling between the interests of the rakyat, the palace, the corporate sector, the JCS etc etc.
People said lots of nonsense about you and your family members over the years. As if you got so rich being an MB (how I wish those people could reveal the billions of ringgits that you had looted instead of just accusing you of these and that). Why don't you just let those buggers become MB. They want it so much, so let them lah. Let us see how Khaled Nordin or Osman Sapian brings Johor to greater heights, as they so fondly said so. You have done enough for Johor. Not only they are not thankful, but they even spit on you...and your family too.
I know, you said this is a "perjuangan sepanjang hayat", but its ok lah. You cannot be too principled. Nobody really care about principles anyway these days. All that matters to them is whether you as MB can make them rich or not. They got contract or not....not withstanding whether they really work for it. If you don't give them (because they are just assholes who only care about their own tembolok) they will go on a warpath to kick you out. Hell, they are even willing to kick your wife and children too.
So, Datuk Ghani, I think you just quit lah. I am also quitting Johor after this general election. Enough lah. Tired already liao.

Ok, happy or not. I told Ghani to quit already. What else you all want? Sheeeeshhhs......

ps. Datuk Ghani, almost forgot, please tell your people not to give up for now and continue with the preparations for the general election. You and they all must ensure BN still hold Johor before leaving. Must go with clear conscience ma.
Posted by BIGCAT at 12:28