I have been following the Pakatan's "Asal Bukan Umno" (ABU) campaign with some amusement.

The campaign, as I understand it was to vote in anyone, except Umno and anyone related to that Malay-based party.

Umno is to these campaigners, the source of all evils in this country. Members of the party are deemed to be corrupt, insidious and immoral.

In fact, DAP leaders such as Guan Eng even equated Umno to the Nazis and the BN government something like the Germany's Third Reich. well, that one was mostly targeted for the Chinese audience la. Najib is something like Adolph Hitler? Are you serious?

My understanding is that this campaign targeted ALL Umno members and those related to them. Ya lah - anything/anyone but Umno, isn't it? Good or bad Umno people, doesn't matter isn't it?

Is it really like that? All those pakchik-pakchik and makchik-makchik of Umno are evil? Are we very sure of that?

Well, there is this Youtube video clip starring that comedian turned Pas ustaz who goes by the name of Bob Lokman which I watched the other day.

It was of course done in the usual Malay comedy acting where Ustaz Bob was hanging out with his Pas friends at a kedai kopi and making fun of the government's financial assistance for those in the lower income group. It was not very funny to me at that stage, but then again I am not much of a Malay comedy fan.

Then came this man wearing a songkok acting as an Umno man. Ustaz Bob and his gang started giving a lecture on the evils of Umno to the guy and at the end told him to throw away his songkok. In its place they gave him a skull cap whereupon they congratulated him for jumping ship to become a Pas man.

Well, it was funny to me at that point as to me that reflects the simplistic mentality of the Pakatan people when they tell everyone, especially the Malays to throw away Umno.

Let's say after the next general election, Pakatan rules the country. What will happened after that?

Will BN still be there to be the opposition?

.My calculation, based on the reasoning of these ABU campaigners, Umno will die a natural death. 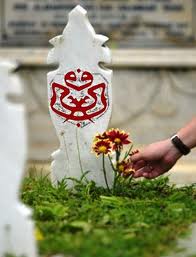 I do not think that BN will still be there once Umno is dead.

So, will everything be honky dory in Malaysia then?

Umno, is the main force of BN, they said. BN is therefore evil as a whole. All those over 50 years of their rule has made Malaysia such a terrible place. Same as Zimbabwe. Really ka? Ustaz Bob have been to Zimbabwe meh? Guan Eng, you have been there ka?

Fine, which party is the main force of Pakatan? Don't tell me they are all equal. If I say I want Guan Eng as PM, would PKR and Pas object against it? I think they will.

Anyway, they said they want Anwar Ibrahim of PKR as PM. Are we so sure everyone in PKR are pure and sinless? Remember arrr....Anwar and the gang are mostly Umno rejects. Are we so sure they got kicked out of Umno because they are sinless people? Think carefully. 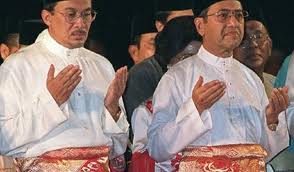 I wonder what was the doa of Anwar and Mahathir when that picture was taken.

Will this country be as perfect as .... let's say Singapore (this is if you ask the DAP fellas la).... once Pakatan takes over and Umno is dead?

Are we sure everything will be fine once Umno is no more?


Are we sure we want to vote just anyone (even an ultra of some sorts) if the Umno candidate is proven to be a good man/woman?