Apparently the Johor DAP people are still very eager to express their anger at State PKR chief Chua Jui Meng despite the gag order by Guan Eng and their boss Dr Boo Cheng Hau's public apology the other day. 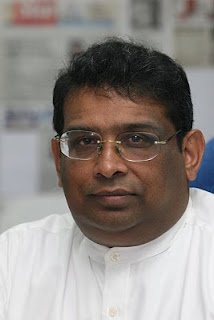 
NO GAGGING: Norman criticises Johor PKR chief for eyeing seats held by DAP and not having confidence in seats given to PKR

JOHOR BARU: A STAUNCH comrade of Johor DAP chairman Dr Boo Cheng Hau has defied a gag order issued by his party secretary-general Lim Guan Eng, by labelling Johor PKR chairman Datuk Chua Jui Meng as a "kindergarten kid".
Norman Fernandez, who is the Johor DAP deputy chairman, also took the opportunity to categorically hit out at PKR deputy secretary-general Steven Choong for uttering lies just to show his unfailing support to Chua following the Johor DAP-PKR tussle.
In his statement yesterday, Norman said ever since Chua joined PKR, it was made known to the Johor DAP that he would be contesting in Gelang Patah, failing which he would trade the seat with either the Bakri or Segamat seats.
"Surely, Chua as a seasoned politician will know that it is unthinkable that DAP will give up the Bakri seat.
"Despite the fact that Johor PKR is having the lion's share of parliamentary seats -- many of which are winnable, Chua keeps salivating for DAP seats.
"It is simply amazing that he does not have confidence in the parliamentary seats allotted to PKR, but instead wants and eyes DAP seats."
Norman said Chua even had the audacity to label Dr Boo a "young man" besides asking Dr Boo not to meddle in other people's and party's affairs.
"In Pakatan Rakyat, Chua is less than four years old. In short, he is nothing but a kindergarten kid in Pakatan Rakyat. There is still a lot for him to learn about Pakatan Rakyat. Sadly, this kindergarten kid wants to overlord Pakatan Rakyat in Johor."
Norman said it puzzled him that Chua had called on Dr Boo not to meddle in PKR affairs, when it was Chua who had meddled in DAP affairs by challenging MCA president Datuk Seri Dr Chua Soi Lek to contest in Bakri, Segamat or Gelang Patah parliamentary seat.
He said it would be more appropriate if Chua challenged Soi Lek to contest in a PKR seat.
On Choong's statement that Dr Boo and the Johor DAP had been boycotting PKR or its events, Norman said it was far from the truth.
On the contrary, he said it was the Johor PKR which did not extend its invitation, citing the Johor PKR Chinese New Year open house in Skudai in 2011 as an example.
Norman said both Chua and Steven had sought to cast DAP as a greedy party wanting to contest every possible seat.
"This is not true. The lions share of the parliamentary seats went to the PKR. In 2004, the Johor PKR contested in the Johor Jaya state seat, knowing very well that it was a DAP seat. However, it meant nothing to Johor PKR, which still contested in the seat against the DAP candidate.
"Now, who is the greedy one here?" he asked.
Citing an example of how PKR went against its words, Norman said during seat negotiations for the Johor Baru parliamentary seat, consensus was reached whereby PKR would contest for the seat while DAP and Pas would contest the Stulang and Tanjung Puteri state seats respectively.
"Choong represented PKR during the negotiation while I represented DAP. Pas immediately organised the election machinery and went on to do constituency work.
"Then came the shocker, with PKR claiming that it had never agreed to give up the Tanjung Puteri seat to PAS."

Note : The statement may came from Norman Fernandez against Chua Jui Meng, but I still believe that it could be actually a warning via proxy by Dr Boo for DAP bully boy Guan Eng to keep his fingers out of the Johor cookie jar.
Posted by BIGCAT at 10:26