Now that Lim Kit Siang has been endorsed by Anugerah Tuhan as the candidate for Gelang Patah, what will happen elsewhere in Johor?

The drama between head of DAP Johor, Dr Boo and Head of PKR Johor, Datuk Jimmy Chua, the Boo-bashing press conference by YB Ong of Senai, the YB Er and YB Gwee fisticuffs - all make for interesting gossip.  But the prevalent opinion being bandied about where Johor is concerned, is the role of astronomical increases of chinese voters in target areas that will power the unholy trinity to storm BN's Fortress Johor.  In Gelang Patah, for example, the number of chinese voters increased by 30%, or more than 13,000 over the past 5 years, while in Tebrau, chinese voters increased by 49%, or almost 11,500, in the same period.

Such is DAP's confidence in their chinese support that a few months back, a DAP crusading trooper had gleefully commented, that various opposition rallies will galvanize a "chinese revolution" in places such as Tebrau, Pasir Gudang, Gelang Patah, Pulai and Johor Bahru, which will presumably result in the fall of BN.  Tellingly, these are the parliamentary seats that the Pakatan are confident of winning as reported here.


DAP Johor has done such a good job here in the south that even Lim Kit Siang is confident of winning in Gelang Patah.  It is unfortunate that the red army invasion of Johor on the wave of overwhelming Chinese support will not be of much benefit to Dr Boo's own national ambitions, unless he is aiming to contest in Kulai.

The fact is, it will be difficult for Dr Boo to develop a new national base too far from Skudai at this late stage of the DAP campaign.  Maybe YB Ong has a real reason to fear that he will be dropped from the DAP GE13 lineup, now that Dr Boo has appointed his man as the Kulai Head of Operations.

Pakatan is also confident of wresting Segamat from BN, which is another marginal seat that will most probably be contested by Chua Jui Meng, which was predicted here way back then.

No surprises there.  Pakatan is so predictable, it is almost boring.

But where is PAS?

Unfortunately for PAS, they are no longer in the Johor equation.  It is all about DAP and PKR.  Since PAS has obviously delivered in Johor, it no longer has a role to play for the unholy trinity in Johor.  The state of PAS Johor is so pathetic, that the likelihood of Salahuddin Ayub winning a parliamentary seat for PAS in Johor is so slim, PAS will most probably field him in a Kelantan safe seat despite its recent "Kelantan for Kelantanese" slogan.  For a PAS Vice President to lose big time in his home state would be too disastrous for the party.

Obviously in the Pakatan scheme of things, PAS has been allocated Kelantan, Terengganu, Kedah and Perlis to govern, and they are quite happy with that.  Their campaigning focus has always been geared to cater to the northern Malay masses of these states.  My guess is, the prospect of getting their hands on oil royalties have managed to pacify PAS leadership, hence the relentless and almost hysterical demands for Kelantan oil royalty.

Selangor, Pahang, Negeri Sembilan and Sarawak is the focus of PKR political ambition, while DAP is content to tighten its grip on Pulau Pinang, Perak, Melaka and Johor.  Therefore, PAS doesn't feature very much in these states, just as PAS has never been bothered about DAP and PKR noises in Kedah and Kelantan.  Sabah is another kettle of fish altogether, and with the on-going Ops Daulat, it is best to leave that speculative exercise well alone for the time being.


It is only right, therefore, to view the Pakatan tsunami sweeping Johor as that of the Rocket variety, on the back of chinese chauvinism that has been nurtured and fanned by both DAP and PKR and enthusiastically endorsed by the Johor Chinese Press.


For PAS Johor, it is game over, and the game hadn't even begun yet. 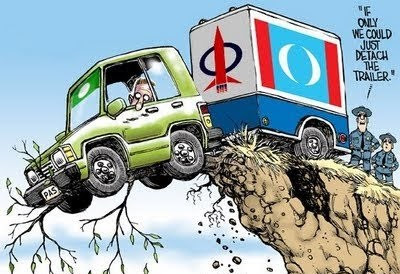