Tomorrow may likely be the defining moment for PM DS Najib Razak's effort to convince the Chinese community that they are better off with BN than Pakatan.

The Chinese New Year celebrations at Dong Zhong's headquarters in Kajang to be attended by Najib will be the ultimate litmus test.

Najib had taken the challenge by agreeing to attend the function after invited by Dong Zhong. Now, whether the Chinese educationist group was sincere or otherwise with their invitation is immaterial. Their reception for Najib at the event tomorrow is all that matter. It will be judged by Malaysians.

If Najib is well received, then everyone, in particular the Chinese community will see it as a sign that the Prime Minister's efforts have been accepted and appreciated even by the Chinese educationists, who are known all these while as not being too sympathetic with the establishment.

If Najib is booed and hackled at the event, then everyone would have the right to judge Dong Zhong, known for its sympathetic overtures to Pakatan, especially the Chinese-based DAP as having no manners for insulting someone whom they invited as their honored guest. I don't think even the most hostile anti-government individuals among the Chinese school graduates would want that to happen. It will be a great shame for their schools if the association which supposed to represent their honorable teachers behave in such a manner. 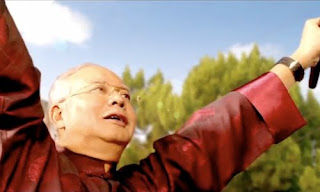 Now, I wouldn't be too quick to thank Dong Zong for giving Najib this opportunity. After all I am still sore with them for several times almost costing the Chinese schools dearly by their demands which I had previously deemed as racists. Those included a demand backed by DAP for the removal of non-Mandarin speaking teachers (read non-Chinese) from Chinese schools.

Unknown to many from outside Johor, most Chinese associations and NGOs in the State are supportive of BN. MB Datuk Abdul Ghani Othman and other Johor BN leaders have been nurturing good ties with these associations. And they had returned the goodwill gestures over the years. For instance, during the Tenang by-election two years ago, these Chinese associations came to BN's assistance by helping in the campaigning and enabling BN to win convincingly by doubling its majority in the constituency consisting over 40 per cent Chinese.

Now, after tomorrow, DAP in particular will know that not all Chinese in this country are against what BN has done for Malaysia over the half a century since Merdeka. There are still among the community who appreciate the fact that despite what has been described by DAP as a supremely evil Malay-led BN rule, the Chinese, as a community are still the most well off ones in the country.
Posted by BIGCAT at 21:58