She's the one in red, holding the yellow Bersih-DAP T-shirt.

Initially, the Pakatan leaders, distanced themselves from the incident. Not even DAP want to be associated with the girl and the others. Some, like Pas spiritual leader Datuk Nik Abdul Aziz Nik Mat even condemned them.

So, when police told her and the others to turn themselves in, she did so. Very good of her. 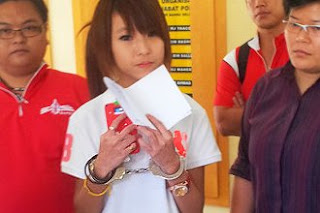 Of course it was normal police procedure to handcuff those suspected of committing a criminal offense. But really la, how can these evil mat mata-mata handcuff such a sweet and innocent looking Chinese girl. So evil la these people....

So, with that, here she is at this Press conference organized by DAP which had earlier distanced themselves from what she and the others did on that Merdeka eve - 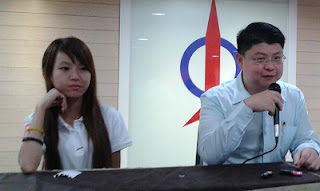 At the Press conference she was introduced as 19-year-old part-time model Ong Sing Yee.

Here is the report of the Press conference by the pro-Pakatan Free Malaysia Today.


Honestly, I do believe her, when she said she doesn't really mean any harm when she stepped on the PM's picture. She was just suka-suka followed the others. Get caught up with the others la....including when she bought and carry the Bersih-DAP T-shirt.

Anyway, it's trendy ma, to support DAP these days. All her young Chinese friends do so also what. Same like all those young people who go into the jungle and joined the communists back then. Just being idealistic, cannot ka?

I think Najib should just forgive her and the others. Show himself to be magnanimous. They are after all Chinese leh....cannot afford to lose Chinese votes, ok?

Imagined if she is to be sentenced to jail because Najib refused to forgive her. Sure gone lah all the Chinese votes.

Errr....if you all still want to charge her for committing something seriously criminal, then I think her real offense should be for choosing a boyfriend who looks like that - 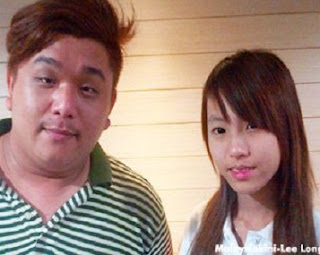