My Opinion of the Foreign Press

I have been doing a bit of reading at Land Destroyer Report (LD).  I was led there by the Tony Cartalucci pieces which had been enjoying highlights in a number of local blogs, for example this one I caught at Alizul's.  These reports are not really pro-BN, but more of highlighting USA foreign policy and imperialism to protect its interests against other powers throughout the globe.

This particular site is interesting to me, not because it also features Nile Bowie as a regular contributor, but because it is one of the few foreign-based sites where we can actually find articles not hostile to or biased against the present Malaysian government.

I happen to be friendly with a number of grassroots BN members on the ground, and I know their frustration at how those foreign press never really care to write about BN's perspective, always painting them in the darker shades as opposed to the "haloistic" (okay, so it is probably a new word) pictures they like to paint of Anwar Ibrahim and the Pakatan.

To most of these foreigners, Anwar Ibrahim is the truest saviour of Malaysia, the righter of all wrongs, the holiest of all crusaders who are up against the wholly corrupt, cruelly evil, and apartheid-practicing racist 3.5 million strong Umno, who forces all the BN coalition members to totally suppress by evil means the rest of the Malaysian population.

According to them, this dastardly act of continuous suppression of the majority has been going on for decades.

The wicked Umno/BN regime has been ably assisted by the hordes of corrupt civil servants who bribe each other in isolation of the totally innocent and repressed largely Chinese business community.

The police who are extremely violent trigger happy sadists who kill and torture because they enjoy killing and torturing all those innocent criminals and joyriders are also responsible for being the killing dogs of the evil Umno/BN regime.

They apparently believe that Malaysian army and other government agencies must be all Banglas and Indos as no self-respecting Malaysian of any ethnicity would vote for the totally immoral Umno/BN regime as it is their postal ballots that have been used extensively throughout the country to ensure Umno/BN's continuing reign of terror for eons.

And all those Chinese students who got government scholarships to study abroad and locally are actually Malays masquerading as Chinese to fool the public, and the repressive private sector that discriminate against non-Chinese applicants are just a ploy by the Umno/BN minions in the private sector to create an impression that the Chinese control the Malaysian private sector.

That was why those Chinese students kept to themselves here, as well as abroad (I know because I studied in the UK and the USA), because in reality they were Umno/BN operatives because if they weren't, there would be no way they would have gotten those scholarships from the racist Umno/BN government and its running dog, the corrupt Civil Services.

And from their latest reports of Malaysian 13th General Election, it seems that they also believed the Pakatan claims that the 13th General Election  was fully fraudulent and totally rigged, that the only votes BN got were from Banglas and Indos who were given multiple ICs to vote several times in different locations, with detergents being used to remove indelible ink stains that enable them to cast ballots several times.

In the mean time, they must have also believed that all the Pakatan polling station observers, who were party members appointed to be observers by their very own parties, were all asleep on the job for not protesting all these irregularities probably because they must be moles planted by the nefarious Umno/BN regime.

Or they must be members who were paid by the vile Umno/BN to keep quiet about any irregularities they saw or the thousands of Banglas and Indos who were thronging the polling stations with fake ICs and washed away ink stains.

Okay, so that was a rather long-winded venting on my part, but I really can't abide these so called professional foreign "journalists" who write for so called respectable news agencies who would actually buy all that crap unless they are really stupid or really lazy or have a different agenda altogether.

Seriously folks, anyone who actually have some kind of grey matter who have been here, talked to a number of people from all walks of life, and not too lazy to do some personal research throughout Malaysia other than talking to some Opposition "educated urbanites" would not have written some of that trash we read in the foreign press lately.

That's why I enjoy reading the likes of Bowie and Cartalucci, despite not writing in-depth about Malaysian politics itself, they give me a different and fresh perspective of the possibilities. 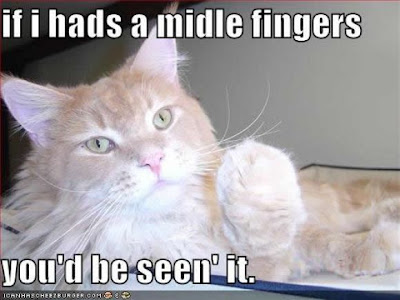