The current opposition leader should be either Lim Kit Siang or his son Lim Guan Eng.

Anwar Ibrahim shouldn't be the opposition leader. If he has any sense of shame he should make way for the Lims to take over the post.

According to Helen, the Lim family's DAP now has 29 parliamentary seats, Anwar's PKR reduced to 23 after all those defections and Pas has 22.

Now, as we all know, DAP will likely further increase their parliamentary seats in the coming general election.

As we should know by now, the strongest weapon that the Pakatan people have now is the perceived groundswell of the Chinese community against the BN government.

In Johor for instance, the only worry of BN is the Chinese voters' swing of mood.

It is a common understanding that the current trend among the Chinese is to vote against BN. Those who vote BN risked being labelled  as a traitor of their race.At least that is how the DAP cybertroopers depict their Chinese rivals. MCA members are portrayed to be as heinous as those Chinese who collaborated with the murderous Japanese soldiers who massacred Chinese during Second Wotld War. The evil Umno Malays are of course akin to those murderous Japanese lah....to a certain extent.

With such tactics, DAP is simply unbeatable....so it seems.

Therefore, I wouldn't be surprised if DAP will emerge as the dominant Pakatan party after the next general election,,,,whether they win or otherwise.

Not such a bad prospect for Guan Eng and dad, eh?

Congratulations Ah Boy......if your family's party and its Malay underlings win, I think you can become PM liao :-) 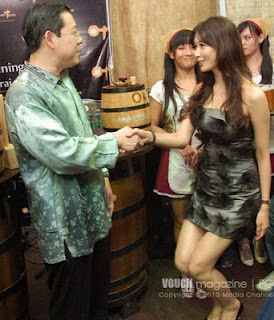 \
(Note : This picture is a sample of how to congratulate Guan Eng properly in future. Learn the posture, ok?))
Posted by BIGCAT at 02:04