Deworming in Sekinchan with Cina boy

I'm at this moment in Kuala Selangor. Writing this using his iPad.

He went crazy today and asked me to follow him all the way to Sekinchan. Since it's Sunday and I wanted to visit my sister living in KL, I tag along lah.

His reason for wanting to go to Sekinchan is really weird -deworming the ears. I was like....huh??? Whatever lah, going out with a Cina bukit like him, I have to learn not to ask too much.

We arrived at a rather old wooden Chinese family house and was greeted by the very friendly Mrs Cheah. There were already several
Chinamen there deworming their ears. 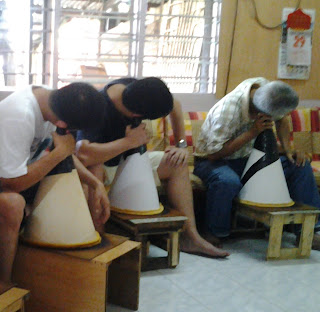 Yup, as in the picture, they have these what look like street cone stuck to their ear. Underneatrh the cone is a small hotplate where a specially mixed herbs were burnt. The smoke actually causes the worms to wriggle out of the ear and drop dead. 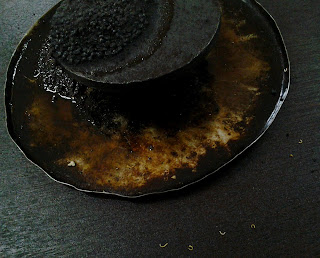 That's the hotplate in the picture...and if you look carefully at the bottom of the picture, you can see those little dead worms. Really geli leh

Well, he went through the thing and true enough, there were a lot of dead worms comiing out of his ears. Mrs Cheah said the whole thing is cleanse the "air passages" in our head and good for bringing relief to those suffering from illness such as sinus. Can simply simply do for fun also. Seeing those dead worms can be quite fun for some... I guess.

He asked me to do the procedure too but I told him it's too weird. Anyway I'm fasting. I'm not sure, but probably it's prohibited to put smoke into the ears while fasting....same like smoking is prohibited.  Well, I'm not sure, and if I'm not sure I rather not do. Tak boleh was was.

Ok, need to stop writing now. Need to buy fresh fish for my sister at the Kuala Selangor market. He belanja...good Chinaboy :-)
Posted by BIGCAT at 19:07