Just heard that Pas spiritual leader Datuk Nik Abdul Aziz Nik Mat today said DAP can go fly kite if they are not happy with Pas' aspirations to set up an Islamic state and implement hudud once they are in power at Putrajaya.

Guess the old man can't take it anymore too when DAP chairman Karpal Singh pushed him to the wall, demanding for him to make his stand clear on the matter.  The Pas Erdogans must be squirming when they heard Nik Aziz throwing caution to the wind like that. There goes their strategy of bluffing the people with all those liberal talks and avoiding making public their stand on those basic aspirations of their party. Their welfare state manifesto also now looks like a piece of crap talk.

The DAP people must be pissed too. They have been working hard to convince the non-muslims that Pas is an ok party. Why Karpal go and cucuk the Tok Guru is a mystery on its own. The king of singh should know that this is Ramadhan month and it would be very awkward for Nik Aziz to bluff or wriggle his way out without looking like a lying prick. 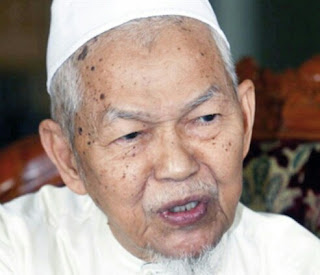 He simply have to say the obvious or risk losing more votes from even among Pas own neo-Taliban segment of supporters. A very unfortunate tight spot indeed for the dear Tok Guru. Honestly, I don't blame him for coming out of the Taliban closet like that.

Honestly, as a Muslim, I would abide by the Islamic laws such as what Pas intended to implement once they come to power. Why should I be afraid? I am not a thief, so no one is going to cut off my hands. I don't plan to commit adultery, so, no one is going to stone me to death. I don't even mind wearing the burkha (just hopefully they come up with a design which is cooler and suitable for our climate).

What I can't stand however was Pas fooling around with the issue ever since they gang up with DAP and PKR. Really irritating la. You want hudud, you say so la, don't bluff people you want welfare state la and other bullshits. See, even the supremely smart Karpal got confiuse and now looking like an idiot for pushing the Tok Guru to the brink. Pas people, you all suppose to be the more pious ones among us muslims. Don't la play around with words like that just to get some extra votes. If you all ditakdirkan Allah to win the election, then you will win. No need to go sneaking around bluffing people like that. Give muslims a bad name only.
Posted by BIGCAT at 23:56