Just now, as I was driving home from office, I remembered the dinner I had with his family when I was in Malacca attending the birthday party of his nephew and niece.

They mostly speak in mandarin but occassionally switch to Malay when addressing me. They all (including his mom and dad who are in their 60s and 70s respectively) can speak english but seems to prefer to speak in Malay with me. Of course their Malay was not the Dewan Bahasa dan Pustaka variety, but I'm ok with that. After all, my english is as bad as their Malay anyway. And my mandarin is zero, except for that wor ai ni bit.

Present was his second big uncle, who is the brother of his mom staying somewhere in KL. I always find him to be the least friendly towards me among his family members...second only to his dad. He told me that his dad was quite close with his ex, the super model looking Singaporean Chinese girl he dated for so many years. Maybe his dad is still getting use to the idea that he is now with a scruffy looking Malay. As for his second big uncle, I have no idea what was his problem with me.

So, it came as a surprise when second big uncle while at the dinner that night started a conversation with me. He asked me about my work, my family etc.

Then he started talking about the on going LRT project near his home.

Again I'm not sure if second big uncle was just trying to practice his very bad Malay with me or if he is genuinely trying to warm up to the idea that I may soon join the family. But my gut instinct was that he was happy with the way the LRT project was being carried out and he felt like telling the government that they are doing a good job on that one. So, the closest he could get was to tell me, a Malay, about it.

You see, his second big uncle, along with the rest of that generation of the family are of the very practical type. Despite their very traditional ways, they are more honest about matters such as race relations and dealing with the government. If the government do good for them, even if its a Malay-led government, theywill support it. That's why I'm advocating for the BN to focus on doing their job of serving the rakyat. They should just stop talking and concentrate on work if they want the support of not just the Chinese but the people as a whole. Do you really think the Chinese like Anwar Ibrahim's fiery speeches? Ok, I don't khow about the blindly idealistic young Chinese but the more mature among them are capable of rationally chosing which side of the political divide is good for the future of their community and the rest of the country.

As for the scums in BN, I'm sure Najib will clean them out once the rakyat have given him the mandate after general election. I'm quite certain about that. He got no choice as BN will never survive the next GE14 if he doesn't clean up house. I don't think he wants to be the last BN PM.

OK, by the way, at that dinner I shared his mom's vegetarian food. The rest of them were eating.....something funny...I rather not put the picture of that thng lah. This picture of a pizza is definitely not what they were eating. I put it here for decoration only. 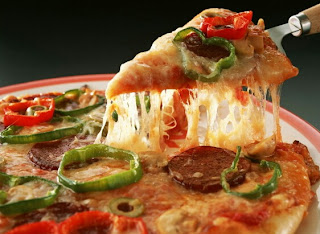