The brave pejuang-pejuang Islam of Pas are in trouble again after they tried to tell the muslims of this country that their DAP ally are willing to consider discussing implementing the sharia hudud law once they take over Putrajaya.

The king of singh Karpal, who is DAP's bulwark of secularism, holding back the tide of Pas Islamists or any other Islamists for that matter has warned Pas to rein in its members from issuing statements which could be deemed to be damaging to Pakatan, in this case by suggesting that Pas'hudud dream may become a reality as DAP are willing to consider it.

Karpal's outburst came after Pas youth chief Nasrudin Hasssan Tantawi, during a debate with Umno Young Ulama chairman said that Karpal had agreed to consider discussing the implementation of hudud after smitten with Islam via his association with Pas.

Nasrudin's statement was actually rather mild but I don't think he knew what hit him when Karpal flew into a rage and vehmently denied he will ever compromise on his opposition against hudud. It was reported by NST today that Karpal described Nasrudin as "a relatively minor offcial in the Pas hierarchy".

I guess, Pas youth members should know now what their DAP ally think of them. Friends, you are just some lowly kampung hero only la. Keep your Islamic pipe dream to yourself, ok? You are only needed when we want to have street demo so that you all can be on the frontline. That one you go in front la. After all you want to mati syahid aren't you? Other than that, you all just shut up, understand?

Karpal said he had publicly stated on Dec 23,2010 that Pas had to accept the reality of Malaysia being a secular state and in the larger interest of Pakatan they should not push for an Islamic state.

"True to my call to Pas, at it's muktamar last year, the party decided to abandon it's avowed aims to set up an Islamic state and decided to give expression to the provision in the Quran which provided for a welfare state," said Karpal.

There you have it, Pas is listening to Karpal now for such important things as it's dream of setting up an Islamic state...so much for pejuang Islam. 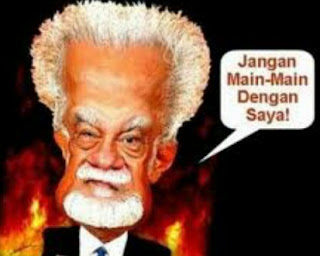