The end of another Guan Eng's love affair

Had dinner last night with a former Sin Chew Daily reporter. I always assume that he is a DAP supporter, the same as most of those from the Chinese newspapers. Well, for the almost a decade that I known him, he has always complained about his unhappiness towards the BN government. They were the usual stuff - policies favouring the bumiputera, corruption, etc.

But I'm ok with him and except for the occassional heated arguments and tears of frustration, we got along fine through out the years. I know that he was not being malicious when he talk about those things. He was just being idealistic and maybe a bit politically naive.

Last night we once again talked about politics, specifically the conduct of DAP's superstar Guan Eng.

He was a bit sombre when I mentioned how the Chinese community now are united under the DAP's leadership and that Guan Eng could do no wrong in their eyes.

"You got it wrong there," he said. He took out his smartphone and logged on to the Star newspaper website, accesed an article and showed it to me.

It was an article by Jocelyn Tan in Sunday Star about the souring of relations between Guan Eng and the Chinese newspapers. (Sorry, I can't link it here because of my faulty netbook).

"That article was translated and published in full by Sin Chew today,"he said. "I think you know what thats means."

"And please stop saying that I am a fan of Guan Eng," he added.

Apparently he was angry with Guan Eng for threatening to sue his former colleagues for asking some legitimate questions during a Press conference.

"That was too much of him. He is getting too arrogant," he said.

And he was not the only one among his peers who is of that opinion. He told me about his best friend who is a journalist of China Press who also think that Guan Eng is getting too big headed. I know his friemd as being an idealistic journalist and never hesitate to say her thoughts on any issue.

"She actually wishes that BN wins this coming election as Pakatan Rakyat, with leaders like Guan Eng are not yet mature enough to run this country. It's not that she likes BN, just that Guan Eng is behaving too much like a little boy. How to runs the country like that," he said.

Well, it seems that the love affair between Guan Eng and the Chinese media is really on the rock now. They are now begining to realise that he is just a spoilt brat and nothing more. 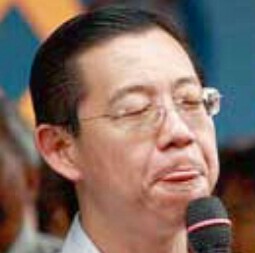