The good Umno people will prevail

One of the things I never try to hide in this blog is my extreme loathing of Umno people who confirm the stereotype of themselves being boorish and corrupt. Yes, there are many of these scums in the party.

I despise these people more than the Pakatan goons because they are the cancerous elements which destroy all the good things done by the good people in Umno.

* those who go around telling people that no one can survive and be a leader in Umno without money. They say this to justify their own corrupt behaviour of buying their shortcut way (or that of their boss') to the highest level of the party leadership.

* those who go around assuming that everyone are corrupt...like themselves. They simply could not comprehend the fact that there are people who are not even Umno members but believe in the ideals of the party and doing something to defend it....for free.

* those who go around behaving like a peacock just because they have a position in the party or given a post in the government courtesy of their political masters in Umno.

Despite my bad experience with these people, I still believe that the good people in Umno will prevail over them. Yes, there are still good and decent Umno members and leaders. They actually far outnumbered the rotten ones. 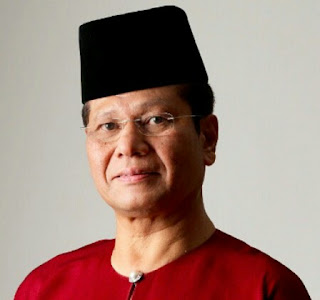 Why I put the picture of Datuk Abdul Ghani Othman there for this posting? Because once he explained to my friend who is a journalist that he never tried to give "duit kopi" to reporters in an attempt to make them like him because he doesn't want to insult them and their profession. Ghani and that small band of his loyalists are the ones who turned me around to support BN. They convinced me by their exemplary behaviour and incorruptible character. I don't care if others do not believe me about Ghani and his people. As far as I am concerned, my consience is clear. I sincerely believe the good Umno people will prevail. I'm sure DS Najib Razak will eventually clean up the party, insyaallah.
Posted by BIGCAT at 01:21