Najib made me teary eyed

I think I am getting too soft hearted.

That day I listened to a song and felt like crying. Today I watched Najib delivered his keynote address at the Umno general assembly and I almost cried again.

It was when Najib passionately swore by the name of Allah and Prophet Muhammad that he will ensure Umno will give priority to the needs of the people above all else that I realized I got tears in my eyes.

A boy who sat next to me in front of the television actually noticed that something was not right with me and asked if I was okay. Of course, I was okay. Very malu la to admit that I almost cried from watching a speech. Luckily I managed to suppressed my tears and it didn't run down my cheeks. That would have been disastrous for my tough girl image.

But really la. I never saw Najib delivered a speech like that. 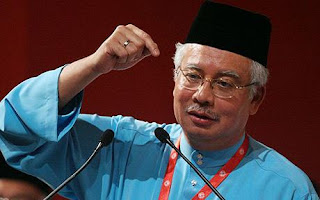 And I used to follow the guy around whenever he balik kampung to Pekan for almost half a decade and saw him giving speeches so many times.

There was no way the guy could had faked it. He was choking with emotion towards the end of his speech. To swear an oath on the name of Allah and the prophet is not something a Muslim do on just any other day. I consider myself not a good Muslim but I would never dare to fool around with an oath like that. Well, not even Anwar Ibrahim dare to do that, ok?

As far as I am concerned Najib has really put himself on the line by swearing that oath. Allah will condemn him to hell if he fails to deliver on it.

The Umno people should realize the enormity of what their president had done. If they still go fooling around again after this, then they are really bastards of the highest order.

If myself, a non-Umno person could be moved to tears by Najib's oath today while Umno members did not feel anything, I don't know la what else the guy can do to convince his people.  If they still after this insist by hook or crook on being an electoral candidate, be given a contract or behave like a male baboon in heat, then Umno is indeed doomed.

Well, I sincerely pray for Najib to be able to fulfill his oath and Umno members to take their president's speech seriously.

You can read the entire Najib's speech here  at