Umno, from infidel to apostate

This is just in by NST alert -

NST 18/11 : Pas' prayers for the fall of BN, Umno is very unIslamic and will destroy the party's credentials as an Islamic party, says PM Najib.

Well, Mr PM, I had just been told by my journalist friend in Kota Baru that Pas' spiritual leader Datuk Nik Abdul Aziz Nik Mat had said that Umno deserves such doa because the party is akin to an apostate. 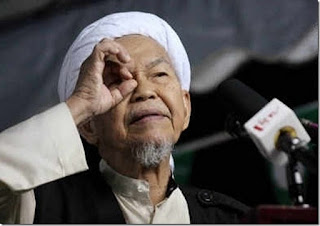 Very nice of Nik Aziz, isn't he? All these harked back to those kafir mengkafir era, it seems.

Well, what can we expect him to say, anyway? The doa after the sembahyang hajat by Pas people at the stadium in Kota Baru on Friday was recited by Nik Aziz's little brother. Of course he has to defend it, notwithstanding the Islamic prohibition for Muslims not to pray for the destruction of others.

Pas président Datuk Seri Abdul Hadi Awang was at least not so crass. He explained that it was okay to pray like what the Pas people did because Pas people had been oppressed by Umno.

See, Umno is evil. Pas people were so oppressed by Umno. Just look at the Kelantanese people, they are as oppressed as the Rohingyas for supporting Pas...eeerrr I think. Hunger and starvation all over the place....I guess. So, its okay to pray for Umno's destruction. Hadi's message was the same as Nik Aziz, only milder.

After all, Hadi need to be more suave, as he may soon be the Prime Minister of Malaysia, what. Back then during the 1980s, he described Umno as kafir (infidel), but now, he need to tone down a bit. Need to be more statesman like, eh.

Well, Umno, last time you were kafir, now you are apostate pulak. Too bad for you all lah.
Posted by BIGCAT at 19:35