As I wrote earlier, Johor MB Datuk Abdul Ghani Othman is likely to retire from politics after the next general election.

That is, I believe, if the PM will let him do so. Najib is after all hard pressed to have all his best men in place for the election and after. 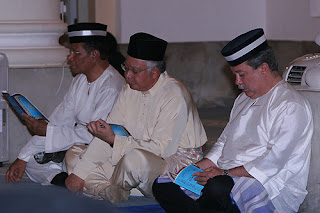 Honestly, how many of these few good men does Najib have? How many are there who are truely free from allegations or perception of corruption? How many have the stature and pedigree to lead the much battered Umno? Bear in mind, after the disastrous Pak Lah administration, and the ferocious attacks by Pakatan bloggers and portals pre and post 2008 general election, not many Umno leaders are left unscathed.

Ghani is actually an anomaly. He has more or less been spared from these attacks by the Pakatan people simply because there is not much they can run him down with. His administration of the State has been tip top - well, not perfect but definitely among, or in my opinion, the best in the country. His personal record is equally immaculate. However, Ghani is actually under attack from within Umno. It is not that he has made many enemies among his peers but his position as Johor MB is the envy of many. It is so tempting because Johor remains as a stronghold of not just Umno but BN as a whole. Johor is also a rich State. The MB seat is simply too tempting to have and that is why so many want it.

What many failed to realise is that Johor is what it is, not due to accident. It is an Umno and BN stronghold not because it is the birth place of Umno. Malays, after all, only make up between 52 and 55 per cent of the population, which is hardly an overwhelming majority. The truth is, a lot of sincere hard work and sacrifices were put in by leaders like Ghani to build the foundation for the coalition's dominance in the State.

This series of articles on Johor is meant to shed light on why the State remains with BN even in the most trying of general elections. These are stories of how putting the interests of the party ahead of one's self is paramount in the struggle for "AGAMA, BANGSA dan TANAHAIR".

For the coming general election, let us see what Ghani has in store for Umno and BN.

The Tenang by-election earlier this year is a glimpse of how Johor BN mobilised its machinery and how it managed to accurately predict the outcome of the by-election days earlier. 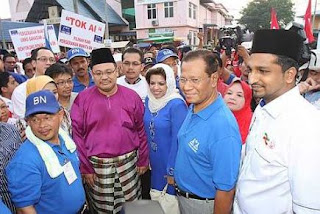 It also gave Johor BN an opportunity to test out its new formula, and provided its grassroots and divisional leaders experience of this new "grassroots leadership" formula.

Objectives going into the Tenang by-election:

1.   Win with a bigger majority than the 2008 election
After the disastrous 12th GE, Johor BN needed a convincing win to boost the morale of party "troopers" on the ground.  The win in Tenang, where Malay constituents represent less than 50% of the total voter population (representative of much of Johor) means it will be a key indicator of how Johor will fare in the next GE.

2.   Empower "Ketua Peti Undi" to lead the campaigning at their own localities
They know their territories and the local sentiments far better than anyone else, so they are given the authority and responsibility to conduct the best winning strategies at their own Peti Undi with tactical support being provided by Johor BN leadership.

3.   Expose higher ranking party members to working with local leadership
Divisional Heads and their teams were fostered to peti-peti undi, but they were subject to the leadership of the local Ketua Peti Undi.  External help was welcomed, but the same rule applies, they must defer to local leadership and the appointed Ketua Peti Undi.  It provided Johor Divisional Heads with first-hand experience in working hand-in-hand with grassroots leadership and localised campaigning.

At the forefront of campaigning, Ghani himself was providing a very low-key, hands-on approach,  personally going around assessing the situation at the peti-peti undi, his very presence motivating these grassroots men and women to strive for better results.  Morale was high.  There wasn't any political posturing, hardly any large-scale (translated as expensive) "ceramah" sessions, and minimal intervention from "outsiders" to campaign activities.  The focus was entirely on managing the voters perception as opposed to influencing national perception, that there was hardly anything interesting to report in the national dailies other than the foibles of opposition figures.

The entire by-election was such a low-key event for BN that there were political analysts, not familiar with the ways of Johor BN and its chief, who began to opine that BN Johor was lethargic and the campaign director was ineffective, i.e. "BAD, BAD CHOICE, Mr Prime Minister".

The outcome, however, speaks for itself (as in IN YOUR FACE, DOUBTERS!!).  As far as Johor BN is concerned, it was Mission Accomplished.

I have been to many post-2008 by-elections, and my observations have led me to conclude that the Tenang by-election is where BN spent the least amount of money, and yet delivered one of the best results, if not the best, to date.

What was amazing was that party workers on the ground lamented that the majority of 3,707 won by BN could have been higher had it not been for the massive flood on voting day.