I think Guan Eng should sue KJ for GUTTER POLITICS. He is after all the leading Umno barbarian who attacked him and his son.

Come on Guan Eng - KJ is actually offering himself as a target to be sued by you. This is from the pro-Pakatan portal Malaysian Insider :

Khairy defends attacks on Guan Eng’s son, calls critics hypocrites
By Clara Chooi
October 18, 2011
KUALA LUMPUR, Oct 18 — Khairy Jamaluddin suggested today there was nothing wrong with his remarks about allegations involving Lim Guan Eng’s teenage son, and called his critics hypocrites for pointing out that he was perpetrating lies about a member of a political rival’s family.
Earlier today, Lim said he was furious with the “barbaric lies” made about his teenage son by “pro-Umno ferocious beasts,” singling out Khairy and other ruling party leaders for perpetuating the allegations through snide comments on blogs and social media sites.
Responding via his Twitter account to the criticisms, the Umno Youth chief said Barisan Nasional (BN) politicians and their families had been on the receiving end of even worse insults from the Opposition in the past.

Guan Eng, if you win in court, I can guarantee you that not only Pakatan people will be cheering for you, but also a lot of Umno people too. As you should know by now, KJ got a lot of enemies, no thanks to the fact that he is the SON-IN-LAW of former PM Abdullah Ahmad Badawi (Pak Lah).

I am sure Guan Eng can remember the GUTTER POLITICAL TACTICS used to discredit Pak Lah which was employed by the Pakatan people, that is to attack his son-in-law, his son, daughter and his wife. KJ suffers greatly for that. 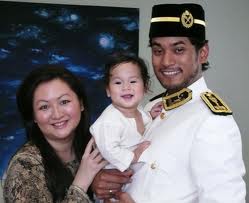 Bear in mind, these GUTTER POLITICAL TACTICS are still being used and will continue to be used by the Pakatan people who now cries foul when Umno bloggers attacked Guan Eng and his son. They will try to find and use anything to bring down the BN government.

Just imagine if they hear anything about Najib's son molesting a girl. What do you think they will do???

Well, actually they had already attacked Najib via his son. This is a video clip of it -

What? PM's son cannot go to a party ka?. He seems to be having a lot of fun but I don't think he molested those girls in the pictures with him.

Now, how about that as far as GUTTER POLITICS are concerned.
Posted by BIGCAT at 19:02