Be cool and don't take the Guan Eng's bait

Woke up too early again. It is dark and raining outside. The temperature should be around 12 degree Celsius. Hopefully it stops raining in a little while. Need to go to the university to settle some stuff. My classes starts next week.

Later in the afternoon, I will join my friend Mr Yuen and three other foreign students, two from Hong Kong and another from PRC on a road trip to the southern old city of Tainan. 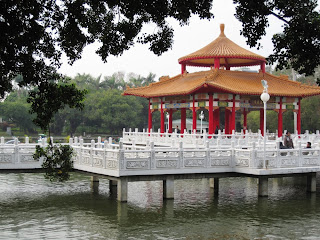 We are going to spend the weekend there. Hopefully the weather improves.

Meanwhile, back in Malaysia, the political nonsense there shows no sign of letting up.

DAP is trying to stretch the "Allah" issue as much as they can. I think they are benefitting immensely from the issue which was rekindled by their sec-gen Lim Guan Eng whom in his Christmas message last month demanded for the BN federal government to allow the use of the word "Allah" in Malay language Bible. The issue seems to unite the non-Muslims against the BN government while splitting the Muslims with the Pas Muslims supporting Guan Eng's demand while the other Muslims opposing it.

Umno, on its part have been relatively quiet about the issue. They seem to be playing it smart this time and ignored the DAP's provocation. It is clearly DAP's wish for the Umno leaders to respond aggressively so that they can turn around and accuse Umno as being racists and using religion to gain political mileage whilst it was them who are actually doing so. Karpal Singh even dragged in the Sikhs who all these while have no trouble with the Muslims in this country. Want to even pick up a fight with the Sultan of Selangor as if he is such a great defender of the Sikh religion. Karpal, you and your sons are devoutly religious  Sikhs ka?

Well, there are of course a few not so smart Umno people who tries to be a hero for personal glory. So, when that irritatingly loud mouthed Deputy Education Minister Puad Zarkashi opened his mouth, the DAP immediately jumped on it. You can read about it here


Well, I hope the rest of Umno and other Muslims remain calm. The non-Muslims are not your enemy. Just remember that the whole mess was created by Guan Eng and his supporters including those from Pas and PKR. They are the ones who are trying to gain political milage by using the "Allah" issue. I hope Malaysians realized this and do the right thing for the future of our country.

I don't think that any right thinking Malaysian would want our multi-racial and multi-religious country which has been progressing well over the past half a century (despite being led by a BN government which have been accused as being racists, corrupt and evil) be torn apart just to satisfy the lust for more power of individuals such as Guan Eng and his gang.
Posted by BIGCAT at 07:07