Nizar should claim for the Chinese sufferings too

I read with much amusement the claim by Pas' former Perak MB DS Nizar Jamaluddin that the Japanese government had paid RM207 billion to its Malaysian counterpart as compensation for the death and suffering of those forced to built the Death Railway linking Thailand and Burma during the Second World War.

It's not a joke, ok? Nizar alleged that the RM207 billion had then been swindled by the BN leader of the government at that time, which is sometime in the 1990s. That means the leader is Tun Dr Mahathir Mohamad.

Wah! That means the old man is not only handsome but also worth at least RM207 billion. He could had used the money to bribe all those Umno people into keeping him in power till he die liao....silly man went on to resign and get bullied by Khairy's gang pulak, eh.

(Note - I have to keep on repeating the amount of RM207 billion here as that is a lot of money.)

I think blogger SatD was equally amused, prompting him to ask this question -
Japanese WWII Reparations: Are PR Politicians on LSD?
before giving a superbly detailed explanation of the issue.

Back to SatD's question on whether the Pakatan politicians were on drug....well, I don't think so lah. They are just like that - they are either irrationally shallow or stupid. They will try to capitalize from everything under the sun to the point of compromising their own level of intelligence. Their hope is for the people to be of even less intelligence then them so that they will believe those crazy stories.

Anyway, I don't blame SatD for suspecting Nizar as being under the influence of drug when he made the RM207 billion claim. If you all had ever attended one of those Nizar's ceramah, you may also think that he is perpetually under the influence of even heavier drug than LSD. His raving and ranting may scare you, ok? 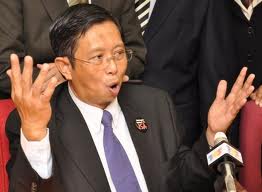 One thing which seriously bothers me though about Nizar's claim was that - how come he only chases the money for the Death Railway victims, who are mostly Malays? As we all know, the Chinese suffered the most during the Japanese occupation. Nizar should stressed that the Japanese pay for the Chinese sufferings too. Go la and accuse Tun M of swindling the Japanese compensation money for the Chinese. I think the amount, if it exist, would be even bigger than the RM207 billion that he claimed for the Death Railway workers.

Well, the reason for this, I think is that Nizar's purpose for the claim is not that he cares so much for the Death Railway workers, but instead because Pas need to win as many Malay votes as they can get. Promise of RM2 million or RM3 million per person/family sure can get them that. This kind of nonsense will sells among the Malays. It will not however sells among the Chinese. The Chinese will straight away know that these are all bullshit. Where got such thing as easy money like that. For Chinese, they generally believe that to be rich, they must work hard. Prosperity doesn't come rolling down the hill just like that. That's why Nizar was not even bothered to sell his preposterous claim to the Chinese.

In Taiwan, the Japanese occupation of the island for 50 years till 1945 was regarded as the starting period of modernization for the country. The Taiwanese, true to their Chinese cultural heritage are practical people. They took the best of the Japanese occupation legacy and apply it for the betterment of their society. It is another thing which we (especially Malays) could learn from them so that we do not get so easily conned by the likes of Nizar.
Posted by BIGCAT at 16:21