Exploiting a tragedy in Pengerang

This statement by the PDRM was released yesterday in direct response to an 1/1/2013 news article by an "English-language daily" as a measure to control the "speculative" nature of how this case has been reported by the Press and the pro-opposition sites. 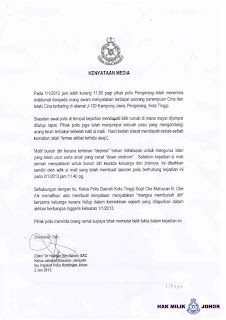 So guys, stop the speculating, will ya?

The pro-Pakatan portals are apparently all abuzz with a story about how a Chinese family committed suicide for allegedly fearing the lost of their home which is being acquired for the Pengerang mammoth RAPID petroleum refinery project.

As I am on the winding down mode at the moment pending my departure to Taiwan, I hardly checked on the news and only happened to see those stories just now.

I immediately contacted a friend in Johor who is closely involved with the issue to check on what had happened.

Here is my friend's texted reply in verbatim -

Ok, that is the real story behind the suicide.

If anyone want to accuse me of lying about this, please show me evidence contrary to what my friend had told me.

I guess, these Pakatan people will stop at nothing to win votes for the coming general election. They even went to the extent of exploiting the tragic death of the three in the family.

They simply have no shame.

Ya, that also goes to the reporters of the pro-Pakatan portals and Chinese newspapers who wrote the speculative stories linking the suicide of the three in the family to the Pengerang project.