Selling the word "Allah" for votes

Things are not looking very well back in Malaysia.

As election draws near, political parties which feel that they are losing support are throwing caution to the wind. It doesn't matter to them anymore if there are going to be instability in the country caused by their action. All that matter for them is to sustain the chance of taking over the country.

Pas president DS Abdul Hadi Awang led a press conference yesterday afternoon which was attended by PKR's DS Anwar Ibrahim and DAP's Lim Kit Siang. He announced that Pakatan is making a stand that non-Muslims may use the word "Allah" to refer to their Gods. 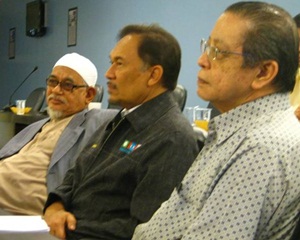 Barely hours earlier on the same afternoon, the Sultan of Selangor had decreed that the word Allah should be used exclusively by Muslims. The Sultan must have understood the sensitivities of Muslims on this matter, especially among those in the Peninsular.

But of course the Pakatan leaders don't care what the Sultan has to say. They don't seem want to back off from being seen as champions of the non-Muslims. Anwar even suggested that the Selangor Religious Council (Mais) which issued the statement by the Sultan had acted independently and maliciously against the Pakatan.

DAP chairman Karpal Singh was even more blatant when he called upon the AG to investigate the Sultan's decree as he argued that it infringed on the constitutional rights of especially Sikhs whom he said on occasions referred to their God as Allah. Well, singh is king indeed, ya Karpal?

Back to Hadi, it appeared that he didn't even want to wait for the party's syura council meeting this Saturday where the party's ulama leadership was supposed to discuss the matter and issue their official stand. The Pas syura council chief Datuk Harun Taib had two days ago made a statement against allowing the non-Muslims to use the word "Allah" to refer to their Gods. Harun had also taken a swipe at other Pas leaders who supported such an idea, describing them as acting as if they have more religious knowledge than the Pas ulama. Well, Harun, looks like Hadi and his band of funny men such as Mat Sabu had checkmated the ulama. They value Anwar and Kit Siang more than you all.

It was also noted that Kit Siang has been quiet despite attending the press conference and had let Hadi and Anwar talked. His son, Guan Eng had started all these when he issued that Christmas  message demanding for the BN federal government to allow the use of the word "Allah" for the Bahasa Malaysia Bible to be expended to the Peninsular. Guan Eng had similarly been quiet after casting the stone. Both father and son are probably now enjoying themselves watching the Malay muslims on both side of the political divide dancing to the tune they had set as part of their schemings for power.

As to why all these are bad for Malaysia - it sets a precedent whereby Islam will no longer have the privilage of being sanctioned as a rung higher than the other religions courtesy of its status as the country's official religion. It will also pave the way for other demands for more concessions by the Muslims. There will then come a point whereby the Muslims will feel that they are being pushed to the wall and retaliated in not so pleasant manner. This is not fear mongering but a reality which if we choose to ignore will consume us all and destroy our beloved Malaysia.

Of course people such as Hadi, Anwar and Kit Siang will say that my assertions here were false. That's because all that matter for them now are votes. Votes mean power....that's all that they care....it is as simple as that. They don't care if this country will later on burn in a fire fueled by their greed for power.
Posted by BIGCAT at 01:40