Arrived in Tainan late yesterday evening. Really enjoyed the drive down south. Tempted to write about it here, but decided not to as this is a sopo and not a travel blog. Don't want to bore the core readers of this blog. Maybe I will set-up a separate blog for that.

Anyway, if you are interested to know more about this place I'm planning to explore with my friends over the next few days, you may check it out here -

For this posting, I actually would like to announce that I had decided to be a vegetarian, at least for the duration of my stay in Taiwan. 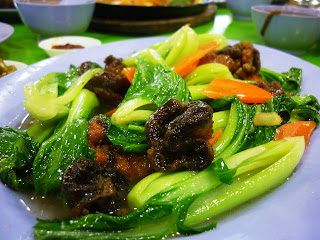 It is the easiest way to avoid the hassle of explaining my Muslim dietary habits. Most of my non-Muslim friends thought that I just can't eat pork. I even have this problem with my Chinaman, who has been with me for many years. He has been innocently trying to feed me all sorts of funny things.

As for the most interesting political story back home, I think it should be this one

So very easy in DAP liao.

Well, I think Guan Eng and the gang will handle our democratic rights the same way once they take over Putrajaya. Any problem can kowtim one. Anyone not happy can write in through "proper channels"...of course the channels lead to the waste basket lah or even worse - the DAP's black list.

As we all know, PAP of Singapore which is the big brother of DAP, did the same thing on its path to power. Party members who opposed the leadership style were forced to leave the party. This is exactly what is happening in DAP now. Both PAP and DAP are using the same dictatorial template.

Bear in mind that once PAP gained absolute power in Singapore, it not only forced  party members who opposed the leadership out of the party, but also jailed them or forced them into exile. Looking at the way Guan Eng is throwing his tantrums North Gangnam style every time things don't go his way, I think it will not be impossible to imagine him doing the same to not just dissenting DAP members but also us ordinary citizens once he has such power.
Posted by BIGCAT at 08:40