The beautiful original peoples of Taiwan

Among the things I'm going to learn in Taiwan is the story of the original people of that country.

They are beautiful people. 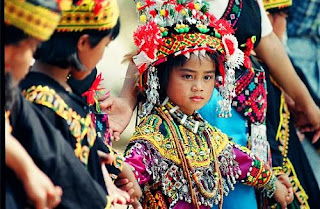 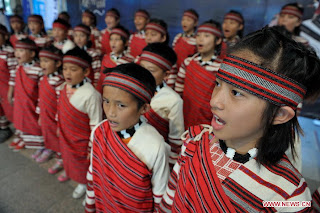 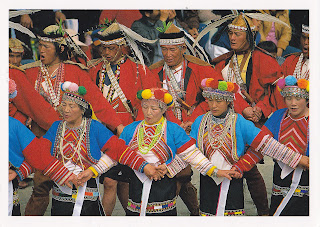 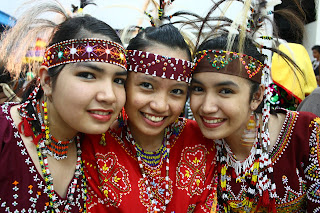 Their story, unfortunately, is not very beautiful. Much could be learned from it.

Here is an excerpt of that story from the most simple source available, the Wikipedia -


Taiwanese aborigines (Chinese: 原住民; pinyin: yuánzhùmín; Wade–Giles: yüan2-chu4-min2; Pe̍h-ōe-jī: gôan-chū-bîn; literally " original inhabitants") is the term commonly applied in reference to the indigenous peoples of Taiwan estimated about 2% of Taiwan population . Although Taiwanese indigenous groups hold a variety of creation myths, recent research suggests their ancestors may have been living on the islands for approximately 8,000 years before major Han Chinese immigration began in the 17th century (Blust 1999). Taiwanese aborigines areAustronesian peoples, with linguistic and genetic ties to other Austronesian ethnic groups, such as peoples of the Philippines, Malaysia,Indonesia, Madagascar, Polynesia, and Oceania (Hill et al. 2007; Bird, Hope & Taylor 2004). The issue of an ethnic identity unconnected to the Asian mainland has become one thread in the discourse regarding the political status of Taiwan.
For centuries, Taiwan's aboriginal peoples experienced economic competition and military conflict with a series of colonizing peoples. Centralized government policies designed to foster language shift and cultural assimilation, as well as continued contact with the colonizers through trade, intermarriage and other dispassionate intercultural processes, have resulted in varying degrees of language death and loss of original cultural identity. For example, of the approximately 26 known languages of the Taiwanese aborigines (collectively referred to as theFormosan languages), at least ten are extinct, five are moribund (Zeitoun & Yu 2005:167) and several are to some degree endangered. These languages are of unique historical significance, since most historical linguists consider Taiwan to be the original homeland of the Austronesianlanguage family (Blust 1999).
Taiwan's Austronesian speakers were formerly distributed over much of the island's rugged central mountain range and were concentrated in villages along the alluvial plains. As of 2009, their total population is around 500,000 (approximately 2% of Taiwan's population). The bulk of contemporary Taiwanese aborigines live in the mountains and cities.
The indigenous peoples of Taiwan face economic and social barriers, including a high unemployment rate and substandard education. Many aboriginal groups have been actively seeking a higher degree of political self-determination and economic development since the early 1980s (Hsu 1991:95–9). A revival of ethnic pride is expressed in many ways by aborigines, including incorporating elements of their culture into commercially successful pop music. Efforts are under way in indigenous communities to revive traditional cultural practices and preserve their traditional languages. Several aboriginal tribes are becoming extensively involved in the tourism and ecotourism industries to achieve increased economic self-reliance from the state (Anderson 2000:283–90). The Austronesian Cultural Festival in Taitung City is another means to promote aboriginal culture.

For the rest of their story in Wikipedia, you may read it here -
Taiwanese aborigines