Where Does Violence Take Us? (Edited & Updated)

Updated: I have something interesting to share with you readers.  I found this rather interesting discussion and picked up on something by this Dawn person, whom I concluded is a filipina but shares about her opinion of police as brutal and very specifically gave the example of Bersih 3.0.


Policemen aren't innocent bystanders either. So they don't qualify as "innocent civilians" being targeted by "terrorists".
Why is it so hush-hush that their own policemen killed an innocent teenager? Is it because they themselves are the terrorists? Barisan itself should be tagged as the terrorist. Look at Bersih 3.0.


I guess the Opposition hordes have taken their poison abroad.

Edited: I have removed the excerpt because it was doing bad things to the posting.  If you want to follow that discussion, suggest that you just follow the link given.

Feeding my obsession with the mental state of pinoy keyboard warriors, I find an interesting discussion of what seems to be a discussion of our political situation.  I will just take an excerpt of what is being discussed here, but you can see the rest there, if you wish.

Other than Hans Hans who openly expressed his support for BN and pretty_ugly_1 who seems to be quite neutral, the majority of the other Malaysians are not BN-friendly.  I find it strange to find these pro-opposition forumers arguing the Malaysian case against the pinoys, and yet back at home you don't find them being as patriotic or appreciative of the relative peace that we have.

Don't they realise that moderation is what makes Malaysia different from the Republic of Philippines?  Why didn't they realise that the demo-culture and overly emo rhetorics that they are fond of using as a means to intimidate the majority and challenge the government of the day is exactly what got us "13 Mei"?  You think politics of hatred by opposition leaders and their NGOs and incitement against the security forces as done by Tian Chua and Nurul Izzah will not result in something similar to "13 Mei"?

When we can't get the Kiram and his terrorists to see reason, can't you see that reflection in ourselves?  That we are unable to see the other point of view and resort to violence, either verbal, or physical as demonstrated by the Bersih violence?  What is the difference between the Tausug terrorists and the Bersih ones? 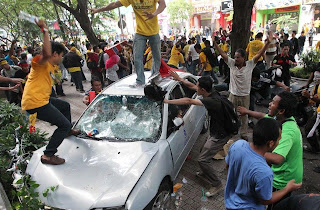 What's the difference between Kiram's daughter's lack of logical reasoning about going to Sabah for a picnic armed to the teeth and the way Himpunan Hijau defied scientific evidence to protest the Lynas "mutants" factory?

What's the difference between Suluk Filipinos who had jobs and homes in Sabah, enjoying subsidised food and fuel, and yet assisted and harbored the Tausug terrorists, from the Orange-clad Anak who were given land titles for nothing and still go around the country trying to create unrest and claimed being discriminated against?
Posted by BIGCAT at 11:30