Lousy cybertroopers and my new tri-plane

My last posting, which was a simple fluff about having a crab dinner with my Chinaman apparently attracted quite a number of readers. More than I expected, actually. Some of the comments were also quite "ferocious".

I am not sure why this was so.

When I wrote that posting, I didn't really plan it to be that way. I just came back from the dinner, took a shower, do the necessary and lepaking for a while before turning in. Surfed the web and found that almost all topics which I wanted to write about had been written by fellow bloggers. As usual, when I found nothing unique to write, I ended up writing fluff, just for fun (like tonight).

As usual, the crowd of DAP cybertroopers came. Some even leave multiple comments. They were undeniably irritating, but I let all of them through for that posting. I hate censorship, and so far only disallowed three types of comments - overly vulgar, blatantly seditious and fishing in the hope of getting the innocents in trouble.

I'm not sure why my blog attracted quite a regular number of DAP cybertroopers for each postings lately. Every time I mentioned a bit about Guan Eng, even in my fluff postings, they will come in droves. Very weird, you know.

I regularly go to Helen Ang's blog, which I think is the most efficient anti-DAP blog around and hardly find any of them there. I wonder why. I don't think Helen censored them. Her blog's page view hits were almost double than mine even though she started blogging just two months earlier than me last year.

Well, it's not that I really care. But just wondering la, what's their strategy. Maybe, it's because more pro-BN people read and leave comments at Helen's blog. It's after all was written primarily in Bahasa Malaysia. So the BN crowd there are likely  more aggressive. Probably, they may think that if they go there they will be out numbered and shouted out. If that's the case, then I think they are quite pussies la.

But never mind lah. I'm ok with them coming here. They need to show their bosses that they are doing some work. Poor buggards. I heard they actually spend a lot training them and keeping them in their pay roll. As far as I'm concerned, the quality of their work, as evident with their comments in this blog, is only so so at best.

Well, let them be lah.

Oh, just want you all to know, I bought a rather expensive kite online today. It's a Red Baron tri-plane. Just for fun. Simply gatal want to have this one. This one I pay myself, ok? It's one of those things which cause me not to have much money all the time. But, it makes me happy. Simply beautiful....watching it flying in the sky.

My Chinaman would never buy me these sorts of things. Stingy fella la that one when it comes to my hobbies. 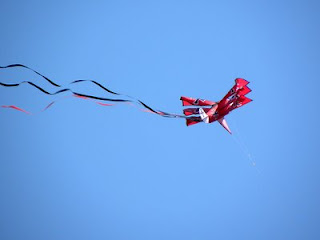