I had written several times on the foolish notion that Pakatan stand a chance to capture Johor in the coming general election.

My contention is simple - you can do whatever you want with Johor, turn it upside down, this way or that way, and still the State will be ruled by BN after the next general election.

It is just a matter of whether BN will win big or small, or whether Pakatan will win more seats or be totally wiped out.

Even the most hardcore Pakatan people in Johor know that this is true.


Pakatan currently have one parliament and six State seats in Johor.  The parliament seat is DAP's Bakri while the State seats are DAP's Skudai, Senai, Mengkibol and Bentayan as well as Pas' Maharani and Sungai Abong. BN have 25 parliament  and 50 State seats.

At the rate they are going now, my bet is that in the next general election, Pakatan will win one parliament seat and not more than 10 State seats.

Ok, let me explain later why Pakatan will get more State seats.

Firstly, these are the seats I expect to fall to them - for Parliament, it will be Kulai; for State seats, they will be Skudai, Senai, Bukit Batu, Penggaram, Pekan Nenas, Bentayan, Jementah, Bekok, Mengkibol and Yong Peng.

Do take note that Pas' Maharani and Sungai Abong are not in my list of Pakatan's probable dominions. Bakri is also not in it.

Yes, except for maybe one or two of those seats going to PKR as tokens, the rest will be DAP's. Pas will totally be wiped out. They are just there to break up the Malay votes. 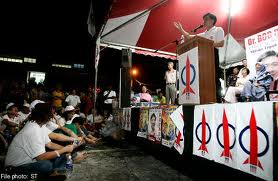 It's because these constituencies in my list are those with clear cut Chinese majority and Umno there are having problem keeping things together. Kulai for instance got almost 60 per cent Chinese voters and the Umno division there are in serious trouble


It's also the only basis behind Pakatan's claim that they can achieve something in the State in the next general election.

But of course they cannot openly admit that. They still need as many non-Chinese votes as they can get to break the especially united Malay vote bank in the State which is still more or less solidly behind Umno.

So, they have to come up with something like this Cooking Lynas-style nonsense for Pengerang

Apparently The Mole had pick up the drift here

And today a group of Pakatan-backed people filed a case at the court to stop the petroleum hub project.

No need for me to write more about it here as you all can go to those links to understand better about those Pakatan engineered Pengerang issue..

These sorts of  Pakatan bullshits will go on until the next general election as a camouflage for their real agenda. Protests against Lynas, support for Chinese schools, demo for electoral reform etc etc. All the same. It will go on and on and on. All just bullshit, ok? The real issue is just about politics and Pakatan taking over Putrajaya. Nothing else.
Posted by BIGCAT at 13:59