A worried heart (with updates)

Resisted the temptation to call him. He doesn't like me calling him when he is with his friends.

Just send him a text asking whether he was at the demo. He send me a reply - "Nope".  Just that single word. I'm not sure whether to believe him but I have to accept his reply as it was and told him to take care and be safe. Don't want to be the nagging type.

I'm actually still worried. Surfed for more news from KL. Things seems to be quite blur. Blogger Double YY reported that most Chinese demonstrators, who are actually DAP members wearing their yellow "Ubah" t-shirt were at Petaling Streets scaring away the tourists. 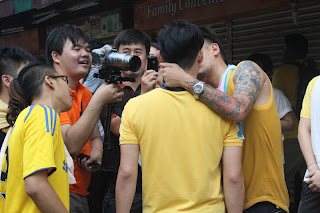 I look carefully at the photos and was glad I can't find him among the crowds.

THIS ONE JUST IN VIA NST ALERT at 3.13Pm
"NST 28/4: Police have started firing tear gas and water cannons at Dataran Merdeka after protestors broke through the barricade in the Bersih 3.0 rally."

So, here we go again...I'm really really praying that he was telling me the truth and not in the middle of this madness.

It's past 3am, woken up from my sleep. It's so hot. Took a shower to cool myself. Checking on the latest on what's happening in KL. Saw some news about the commotion near Dataran Merdeka about midnight.  Some of the demonstrators had already tried to breach the security barrier around the place. They even tried to stop a police bus from going into the area. 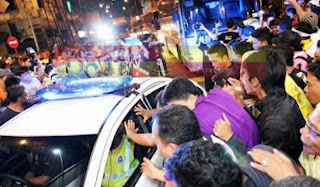 I immediately worried about him. Felt like calling him but stopped myself as I don't want to disturb him in case he was sleeping.

Anyway, the reports indicated that almost all the demonstrators who seems so eager and cannot wait till tomorrow to have the demo were Malays. A report even stressed that not a single Chinese was seen in the crowd. So, I don't think he was there.

Of course it's a bit sad to note that when it comes to these sorts of nonsense, it's always the Malays who were more advanced than others. They seems to enjoy these sorts of things and see them as a fun thing. I guess Malays have yet to shed their "minda berhibur" (entertainment mentality?). Probably that's why Harian Metro is their number one newspaper.

Wouldn't it be nice if Malays are also the most advance in other fields such as science and technology etc etc?

I bet, during the demo tomorrow, the Malay idiots will be on the front row again. Good also, that means if he is to be stupid enough to go to the rally, he will be at the back with the other smart Chinamen.

Of course, better still if he just sleep off the whole day at home la...

I'm hoping that he is not going to join the rally at Dataran Merdeka tomorrow.

Of course I'm worried about his safety. That sorts of rally can easily turned violent. But I know he will not listen to me one. Stubborn boy. He said he is hanging out with his best friend that fanatical DAP guy in KL this weekend. And that guy came all the way down from Penang to join the rally. So, he will most  likely join him tomorrow.

I actually got all stressed up about this today. He didn't say he is going to join the rally but he didn't deny it either when I asked him. All I can manage was making a sad face. Can't ask too much. He can be quite garang some times.

Sometimes I don't know why I fall for him. Not very handsome, garang, don't love me that much, bully me all the time and always not around. Chinese some more. DAP supporter some more (although he always denies it and scold me whenever I calls him that).

All I hope now is for him to be safe and that everything will be alright.

Of course it's not much of a hope because the whole purpose of the rally is to create havoc. 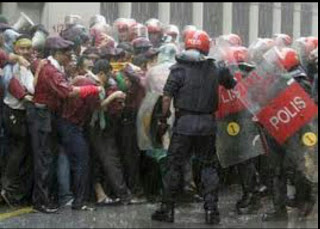 It's about a show of force and creating a perception that the current government is bad and suppressive. That's all.

Perhaps the only participants of tomorrow's rally whose motive are genuinely what they say to be their's are the LGBT crowd. Unlike the others who use a fake struggle to achive their political aim, the LGBT people are using a fake political aim to achive their struggle, which is the legalisation of free sex.