Marching with the pot belly pig

So, looks like we are going to have another Bersih rally.

The Pakatan people need to keep the people interested in their bullshit. That's why they are going to have all these rallies. Lynas la, Chinese education la, Pengerang la, ya di da ya di da....

Doesn't take a rocket scientist to see that it's all just to counter BN's momentum of support which is snowballing as the general election comes ever nearer.

All those talks about environment ka, electoral reform ka, whatever ka are all bullshit, ok? All that matter is for them to topple the BN government.

Najib can follow whatever they say or give whatever they want, and still they will not stop the nonsense because those things about environmental protection, better electoral system or whatever else are not what they really want. What they want is power. That's all that they want. The rest - let me repeat, are all BULLSHIT.

Sorry aarr, today I feel like being harsh a bit. Bad mood leh. Nobody seems to love me today....never mind.

Ok, do you all think they will be happy if the Parliament Select Committee adopted all their demands, even those which doesn't make sense?

Come on la, let's get real. They will just come out with another excuse to have their happy happy rallies. That one they say only la. Really. Up to you all la want to believe or not, but that's how I see these people and their nonsense.

To me, it's the only way for them to keep themselves relevant as the general election draws near.

Well, you all just wait and see. My prediction is that, this is going to be the story line -

They are going to demand to make noise at the Dataran Merdeka. The authorities will say no and proposed for them to have it at the Shah Alam Stadium. All sorts of nonsense will follow. Demand to see the Yang DiPertuan Agong, meeting with the PM, meeting with the police etc etc. In the end, they will still go and have their hu ha hu ha in downtown KL so that they can have that dramatic effect. Police going to fire a few tear gas and a bit of water cannon. Then they are going to claim that the police are brutal, the government despotic etc etc. Marina Mahathir also going to have some fun promoting herself as a cool liberal, something like that daughter of Fidel Castro. Well, to cut it short, the whole circus again lah.

But, really la. Do you all think the ordinary people will be impressed ka with all these crap? I mean, for those people who lead an ordinary life, work hard for a living, thankful for what they have, and grateful for the good life that they have in this country. The Pakatan people keep saying our country is so bad that it's like Zimbabwe. Really ka? That bad ka? How many of those Pakatan people have ever been to Zimbabwe to make the comparison?

Our electoral system so corrupt ka? Is it like North Korea? Or is it like China? Errr...China, the next number one world economy got election ka? Eh, you all check yourself lah.

Eeeerrr....the funny title....eerrr, that one I simply simply put only. Just for fun. hehehehehe
You all remember this nice looking pot belly pig or not? Familiar or not?
Nice piggy piggy :-) 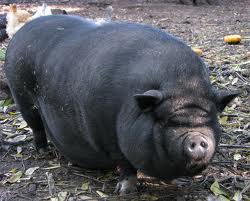