I read with particular interest this posting Why Chinese students stay away from anti-PTPTN demo by Rocky of Rockybru.

It was based on a translation from a Nanyang Siang Pau's editorial about paying back what one owes.

In this case, the PTPTN loan which payment was demanded to be waived by a bunch of Malay "students", backed by some Malay politicians.

These Malay "students", most likely being asked to do so by the politicians, demand for the government to provide free education for university students. Good one, they must have thought to be turned into a political point for the coming election.

Anyway, the article reminds me of a conversation I had with someone close to me about nine years ago.

We were arguing about all those freebies and scholarships given to bumiputera (especially Malay) students. Especially those undeserving mediocre students.

I did my degree without getting any such financial assistence, but since she was sorts of attacking the Malays, I felt it was my duty to put up a defense.

It was the usual bumiputera defense about being left behind and given the assistence to catch up with the more advance and richer Chinese. I know it was a bit of a flimsy defence but at that time it was all I can thought of.

Deep down inside at that time, I know she was right. We can't continue pouring money to help undeserving people. They will just ask for more and more. They are just incapable of thinking responsibly and will always believe that everyone else need to give them everything that they want. These are the shameless Malays. These are the type that are camping at the Dataran Merdeka. 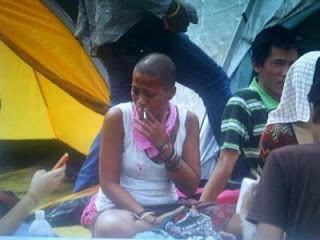 Don't they realise that the money they demand be given to them actually belongs to all Malaysians including the poor who pay the taxes in one form or another? Yes, that include the Petronas money. That one is also duit rakyat, ok?

Don't they have any maruah claiming that they can't be paying back that money once they graduated and have a good job?

Don't they realise that they already have it easy?

The person I had that argument, for instance, spend two years as a waitress at a restaurant in Singapore before saving enough to continue her studies in Taiwan. No scholarships or even loan despite her being among the top students in her school.

If she is a Malay, definitely she can get a place in UiTM, complete with PTPTN loan. I am certain she will gladly pay back the loan once she finished her studies, and probably think how wonderful of the government to provide such a loan facility for her.

But as it turned out, the tough road she went through turned out to be a blessing for her. It trained her to be tough and street wise....much better than me, in fact. She is now successful and as far as I am concern have the bragging right of being the winner of our past arguments on this matter. Well, good for her.

To all those stupid Malay "students" camping at Dataran Merdeka - STOP BEING STUPID. NOTHING IS FREE IN THIS WORLD.
Posted by BIGCAT at 11:41