It looks like the planned demo at Dataran Merdeka this weekend will be a really rojak affair. From what I have been reading, the groups are all backed by Pakatan people and their allies and they are -

1. Anti-Election Commission group- supposedly led by Ambiga but actually engineered and led by DAP, PKR and Pas leadership and consists hardcore members of those parties.
2. Anti-Lynas group- supposedly led by self-professed environmentalists but actually belong to DAP leaders as a vehicle to unite especially disgruntled members of the Chinese community.
3. Anti-PTPTN group - supposedly without leaders and consists of undergraduates but actually controlled by PKR cadres and mostly consists of mediocre Malay students and a lot more who are not really students such as bald women.
4. Pro-LGBT group - led by some LGBT people and consists of lesbians, gays, bisexuals, transsexuals etc etc. They are  sanctioned to join the demo by Ambiga and her Bar Council buddies, I think.

NOTE : Pas' Unit Amal people who will be in charge of security at the demo must be careful not to chase away those weird looking and sounding LGBT people. They are in this demo with you all, ok? Really, they are not from Umno. I know you are all anti-homo but for this one you all kena tahan, ok? This is part of your jihad to topple BN, ok? 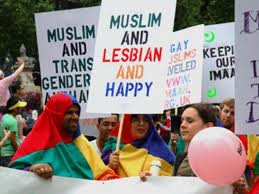 Errr....got some more group is it? I heard there are - such as anti-Felda group and anti-Pengerang group, but those were not confirmed yet. See lah how.

DBKL already said they can't have it at Dataran Merdeka but of course they will not listen. So, it's going to be another hu ha hu ha again. A bit of water cannon, a bit of tear gas, a bit of play dead ..... 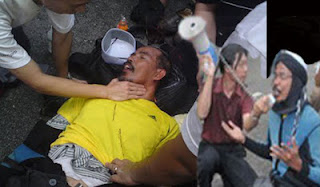 Just hope there will be no real death like last time.

Ok, if I'm in KL I wouldn't be going to down-town KL this weekend. I will probably be shopping at my favourite shopping centre, The Curve. Maybe look around for things at Ikea and have that cheap hot-dog they are selling. Love to put lots of mustard on mine ;-)
Posted by BIGCAT at 22:16