Note: This is a continuation of Men are bastards

Yup, as I had wrote, men are bastards. All of them are like that. No exception. They will cheat on women if given half the chance. They are weak creatures who are susceptible to the flimsiest of temptations.

So, girls, keep them on tight leash, ok? It's our duty to prevent them from making a fool of themselves such as letting themselves be video taped and seen by the whole world of having disgusting things such as a crooked penis.

I know it is not easy, but do try your best, ok?

Well, by now, everyone probably know already about the allegations of moral impropriety and related corruption against Minister Shafie Apdal. 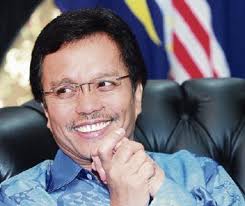 Ambiga and her upholding rule of law Bar Council buddies most likely had told their Pakatan friends that it should be innocent until proven guilty....hehehe....ok ok just kidding, of course no such thing.

This is after all too juicy. An Umno vice-president allegedly caught being naughty with a Bollywood looking starlet. Got over RM1 million from don't know where also in the center of it all. The allegations indicated that he paid her RM100k per go. Very expensive squeez liao.

But really la, the guy have not even been charged in court yet. Maybe he had even married the girl. We don't know that, don't we. Like other guys who are chicken shit of their wife, he may had kept it secret. No video also. Just a police report by a driver. You know lah these days, people lodge police report la, make SD la, then fly off to India or London.

Of course, all that are irrelevant. This is politics where winning people's perceptions is all that matter. Facts doesn't really matter.

In this game, I have to give it to the Pakatan people - they are simply the best. BN people are no match against them, not even by a long shot. They can convince people that they are angels despite clear evidence which shows otherwise.

Nope, that's not him, that's someone who looks like him. Confirm must be Umno's doing - Only Pakatan people can pull this off. Respect lah.

Chase the non-Chinese speaking teachers out of our schools. They are BN's agents send to destroy the identity of our schools....errr, what? We are racists? Where got one? We are Malaysian first la. We love the Malays, especially Pas people. What? Pas people are Muslim first? Don't worry, that one can adjust la.

Pakatan people are good, are not them?

Back to Shafie, I  think the guy is as good as fried. Guilty or not, he is already judged based on perception. He is an Umno guy, and not a Pakatan guy. Pakatan guys got video or DNA still ok one. They are that good.

The mould had been set that way. People don't care about the truth. They want to be entertained.

They want to believe in juicy stories. But the juice must be of the right dosage. Having fun with a cute foreign prostitute not juicy enough. Having fun with handsome coffe boy too disgusting pulak, But having affair with  an artis is just nice, don't you think? Lots of money allegedly involved some more.  That's why Harian Metro is the best selling newspaper in the country. They know how to get the right dosage of sleeze in the stories. If ever BN want to catch up with Pakatan in this department, I propose they get help from Harian Metro people.

The only difference is that we are fimiliar with the modus operandi of one gang. So, easier to catch them. The other one we don't know yet, but inidications seems to suggest that they are even worse. At least that's how I see it.