Punish them at the ballot box (and in court)

I'm now hoping for PM DS Najib Razak to call for the GE13 before the end of next month.

The sooner, the better.

Itching now to cast my vote after what happened in KL yesterday. 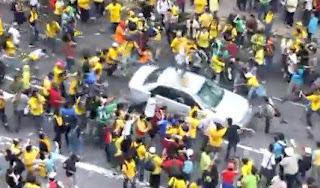 Just want to get it over and done with. I think the rakyat who are sensible people would have realised now what kind of people these Pakatan goons are.

The so-called Bersih 3.0 riots really opened the eyes of many, especially those in the middle ground, of the dangers faced by this beautiful Malaysia.

First there are the naive egoistical idiots such as Ambiga who think that the rest of us must abide by what they think is right for this country. They ended up being the willing tools of Pakatan at the rioting yesterday.

Then there are the Pakatan leaders whose modus operandi is simply to exploit everything under the sun to get the power they are craving for. Yesterday, they were the ones who instigated the crowd to break the barrier at Dataran Merdeka which triggered the violence. They want the publicity and to create an impression that the government is evil and repressive.

However, when things got out of hand due to the overzealousness of their supporters, none of them are willing to bear responsibility. 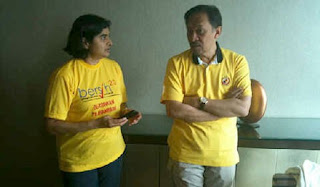 As of now, the Pakatan cybertroopers are working overtime to contain the fallout of what happened yesterday. They tried to blame everyone except people from their side. They even tried to blame the violence on the injured policemen when it was so clear from the evidences that they were the ones who resorted to barbaric and violent behaviour.

Now, there is one way to punish these vermins and their leaders. AT THE BALLOT BOX. We need to make it clear that we do not want leaders who encourage people to go to the streets to get what they want and resort to violence on others who do not subscribe to their idea of what is good for this country.

And as to why the leaders of these mobsters should also be punished by the laws, go to this SatD's posting

and watch the video which clearly shows who was the person who instigated the rioters to break through the barricades at Dataran Merdeka which triggered all the violence.