About those who keep their promises

According to BigDog, there were 30,000 people at the gathering, but I read somewhere else where it was reported that there were about 70,000.

Hmmm....BigDog is definitely not an Umno bootlicker then. Otherwise he would had put the attendance at more than 100,000, isn't it?

Never mind lah. I did called a journalist friend who was there and he indicated that BigDog's figure seems to be a bit small and the 70,000 was more like it.

Well, this picture seems to indicate that the crowd is big and enthusiastic enough. 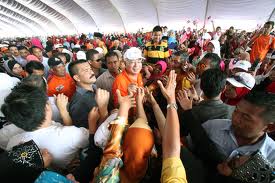 Since it was a carnival like function, I guess it was something like the Jom Heboh type. After all, it was organized by Media Prima, the parent company of TV3.

I'm not much a fan of that type of carnivals, but it seems a lot of people love it. So, I guess it was not such a bad effort in providing the leaders with an opportunity to touch base with the rakyat.

Since it was about keeping promises, I think it's good that the rakyat be reminded that BN have throughout the years kept their promises. No matter how bad we think of them, BN have always done their best to fulfill their promises.

Maybe not all, but most were indeed fulfilled. Otherwise we would had kicked them out a long long time ago. We, Malaysians are not a stupid bunch, aren't we?

In fact, we almost did that in 2008 after that hopelessly hopeless Pak Lah gave us false promises only later on to brake those promises. The worst was when he promised to follow-up on efforts by Tun Dr Mahathir Mohamad to keep the rakyat safe and the country's sovereignty intact, only later on to royally screwed up everything.

The same promises con game is now being played by the Pakatan people. How many of the promises they made to win in Penang, Kedah, Kelantan, Selangor and other places here and there have been fulfilled? Do look around you and try to remember what they had promised us?

People in Penang for instance, have your life improved so much since DAP took over? Do you eat better? Sleep better? Live in a bigger and better house? Things are cheaper in Penang now? Ok la, if you want to say so, Guan Eng is better looking than Koh Tsu Koon, I will try to swallow that la but other than that, what else had improved?

People of Kedah, how about you all? Things are better now is it? The paddy fields yield better now that alim ulama like Mat Sabu become leaders of your State?

People of Selangor, garbage collected on time now or not? Water got enough or not? Everything ok? Port Klang now look more beautiful or is it even worse than it was?

Ok, Kelantan people, I don't want to ask. They have been living under Pas for too many years. I don't think it's fair for me to ask them these sorts of questions. Nanti they got angry with me pulak.

Najib had over the past three years did his best to restore things. Indeed he have been successful beyond expectations. Yet, the journey is still far and the biggest hurdle is just around the corner  The GE13.

Let us see whether we all people could differentiate between those who keep most, if not all their promises and those who just say want to do this and that but suruh buat haram don't know how to do them properly, or buat buat forget pulak after they got the power.
Posted by BIGCAT at 21:46