I'm not really in the right frame of mind to write any hard political stuff these past few days. On medication today...a bit drowsy.

So, I think I should just settled with writing about what ever little I know about PM DS Najib Razak. To make it easier, I'm going to put it into the five things I like about him and another five which I don't like about him.Just light stuff, this one.

1. He got very soft hands. Try shake his hands and you will know what I'm talking about. I think men should have rough manly hand. Nonetheless, Najib's handshake is very firm which sorts of compensate it.

2. He like to tease his wife in public too much. I have seen this many times. Sometimes in his speech he would joke about how men like to have more than one wife. He will then give his wife, who was on stage a naughty look. Rosmah will then give him the evil eyes of which he will laugh a bit and immediately said of course he is not that type of man. Najib is particularly fond of pulling this stunt whenever he goes making his rounds meeting the orang kampung in Pekan. Datuk, you better don't push your luck, ok? Made me cringed whenever you did that lah.

3. He is too polite. Right after the disastrous 2008 general election, I told one of Najib's close aide that his boss better immediately take charge from Pak Lah. I felt at that time Najib should just tell Pak Lah in the face that he should hand over the premiership or otherwise the country is doomed. The aide said that is not his boss style. Najib is a Pahang nobleman and being one doesn't allow him to kick someone who is already down. Personally at that time I'm inclined to believe that Pak Lah deserved to be kicked for his stupidity. Then again I'm not noble like Najib. It's actually a good character of Najib, but it sometimes leaves me so angry and frustrated.

4. He is too forgiving. After he took over as PM, Najib retained most of Pak Lah's Cabinet. Some of them are quite useless. Some are those who were part of the gang who tried to undermine him when he was the DPM. Some are the kurang ajar ones who spat at Tun M at the height of Pak Lah's rule. I was so dumbstruck when he didn't chop off these people. I was however told that Najib is not a vindictive man. He doesn't punish people based on his whims and fancies. He doesn't do things without looking at the overall pros and cons. OK, fine Datuk, but please la, after the general election get rid la all these eyesore people. Really sakit mata and sakit hati la I watch these people.

5. He is too accommodating. I can't ever remember Najib forcing anyone to do anything. I can't even remember him getting angry. Even Pak Lah used to get angry from time to time when he was PM. I think Najib tries too hard to please everyone. Or is it, it's just him being himself, because he likes to make people happy. I'm not sure about this because I don't really know the PM that well. It's just that I don't think he can please everyone. It's just the way things are in this world. There will always be people who simply love to bitch about this and that. That's why we got satan with crooked penis stirring up trouble in this world.

Ok, now the five things I most like about Najib -

1. The guy is cool. Well, not as cool as Tun M, but cool enough. Still, for one thing Najib never jumped when provoked. I think Najib has been accused of a lot more worse things in his three years in office compared to Tun M's 22 years. Still, did you see him jump? He didn't even bothered to sue anyone. Najib is not like some politicians who go around suing even small time bloggers by the millions. As it goes, those accusations, which include murder just died off once people come to their senses and realize how ridiculous they were. I don't see Najib any bit different than he was three years ago and after all those libels and slanders. He is also cool in the sense that he can hangout with just anybody, young and old of all races. The only thing not so cool about Najib is that for EPL, he supports MU.....support la Cardiff, Datuk.

2. Najib is smart.Well, he would not be a PM if he is not smart isn't he. Even Pak Lah used to be smart, except that he sleeps too much, thus rendering him stupid, I see Najib as smart because he comes out with all those 1Malaysia things and other sorts of improvements to the country over the just past three years. The way he handles the Pakatan people is also smart. No hysterics from the man, just factual explanations to answer whatever criticisms thrown at him and the government. Just compare him to Anwar, who only can talk as if he is so smart; Guan Eng, whose immature tantrum-ridden behavior is akin to a nine-year spoiled brat and Hadi Awang, who can't seems to think for himself.

3. Najib is an attentive person. He always goes back to Pekan to check on his constituents. I don't think there are any other better wakil rakyat than him..He used to go back almost every weekends when he was a DPM. Now probably slightly less that he is even more busy as PM. I had seen him going around in Pekan, which is his natural setting. No kompang and bunga manggar there. He could just popped out in a village with a few people in tow and happily chit chatting with the makchik and pakchik. Even the Chinese shopkeepers in the small town would not be shocked if he suddenly turned up near their shop as he always do that whenever he comes back to Pekan. There was once a heart-rendering newspaper report about a bed ridden Orang Asli living somewhere deep in the interior of Pekan. This was about five years ago. That very weekend after the report came out, Najib came down to visit the man and his family who are living in a small hut and handing out whatever necessary help to them. I remember that Najib's visit well because I was told that he didn't flinch as he climbed up the rickety stairs of the hut, fully realizing there was a little baby wild boar kept in a cage under the hut. The little fella was caught in the jungle and was supposed to be eaten by the family later on.

4. Najib is a hard working guy. Even a DAP friend of mine admitted to me once that Najib is more hardworking than most other leaders that she knows. She was comparing the PM with Singapore's Lee Hsein Loong, who despite being a hard working PM is no match compared to Najib. Najib seems to be moving non-stop these days. Try check his itineraries and you will wonder how he keep it up. Keep in mind that the guy is over 60 already.

5. Najib dearly loves his wife....which can't be said of that many men these days. Enough said. 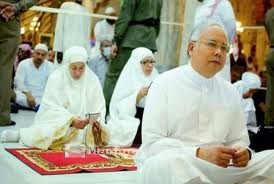 Ok, I am going back to sleep. This cough syrup the doctor gave me is really powerful liao.
Posted by BIGCAT at 14:17