Things which will topple BN

The Pakatan people have been cooking up a lot of issues over the past few months. All very powerful ones leh. Environment lah, education lah, land acquisition lah, etc etc. Need to keep the momentum going. Election getting nearer.

Some of these efforts were good for them, but some backfired and burned their ass.

The successful one, to me, was the anti-Lynas demo. It got the attention of especially the Chinese community, and roped in Chinese-own newspapers to back them. Biggest demo attended by mostly Chinese participants. Very united united. Of course it got nothing really to do with environment. Pure politics la that one. Well, never mind, once in a while what.

The backfired one was that DAP-backed Dong Jiao Zong rally on Chinese education. It really made DAP looked like a Chinese extremist party. Want to chase out non-Chinese speaking teachers from Chinese schools....what kind of demand was that if not a racist one? Malays of Pas and PKR really were in a spot because of that one.

The anti-PTPTN campaign is also not so good for them. Want to give free education for university students they said. Well, what they did not say was that such a thing will cause the government to increase taxes. Not a bit ok. Want to abolish the PTPTN loans and use Petronas to finance it they said. Like that Petronas will surely be in trouble within a few years. Those students who support Pakatan and demo at Dataran Merdeka apparently didn't realize that they look very irresponsible and selfish - study want free, after that don't want to help their younger ones by paying back the money they used. I don't think the hard working, tax paying uncles and aunties want to support these ingrates. 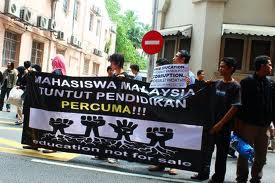 The Pakatan's attempt to derail the Pengerang petroleum hub project in Pengerang also will likely fail. The locals, except a few who want extra compensation money, support the project which will transform Pengerang into a major oil and gas center in the world. It offers better future for their children, who will have better employment prospects in their own hometown. No need for them to be coastal fishermen anymore to stay in their kampung.

I'm not sure what will happen to the planned Bersih 3.0 demo in Dataran Merdeka. Probably another hu ha hu ha like last time. In all probability, it will make them look like a bunch of hooligans. How many times want to demo? Causing problem only. Want to turn KL into Bangkok is it? Or is it like those Arabs? Syria? Eh, this is Malaysia la. We are not much into these hu ha hu ha thing. Once in a while can la, but too many can fed-up one. Want to go shopping on weekend also susah.

Whatever it is, I don't think all these nonsense by the Pakatan people can topple the BN government. Those are actually only to make their presence felt. Keeping the fire burning, so to speak. The participants of those demos are mostly their hardcore supporters only. Ok lah, with the exception of people like Marina Mahathir, who wants to look young, cool and liberal. Being anti-establishment is very fashionable liao. I really understand. I was like that also when I was young and stupid.

To me, what actually can topple the so-called evil BN government are the small small things which makes people angry with BN. Simple local stuff.

I give you a real example, ok?

Guess who they blamed for the insensitivity of the local authorities which caused them to lose their source of income?

Ya, very smart....BN lah. Tonnes of votes for BN lost that way. Really, that's how it works. And that's how BN going to lose....if they are going to lose the election lah.

This one very difficult to address, ok? The civil servants not sensitive or whatever, BN got the blame. What to do, that's how it is. Of course the same principle doesn't really apply in Pakatan-ruled States. Civil servants not performing well, it's the BN federal government's fault. The Pakatan State government got nothing to do with the mess lar.  Police shot dead a teenager fleeing a police chase in the middle of the night in Shah Alam, blame the BN federal government. Got some more, but enough la. Yup, that's how things are nowadays.

To be fair, there are also these small small things which are the sole fault of BN people.

This one also a real story.

A BN YB in Batu Pahat, who is known to talk too much go and appoint a ketua kampung without consulting the grass-root. The new ketua kampung had lobbied for that position but he is actually not well liked by the locals. This YB arrogantly thought that just because the place is a BN stronghold he can do whatever that he wants. Now the orang kampung are angry already. They planned to boycott BN in the coming general election because of this matter. These used to be hardcore Umno supporters. Simply simply lose votes like that.

Eh, YB, in case you are reading this, Batu Pahat got this big Pas markas some more, you know or not? You do these sorts of nonsense, I think you will become a one-term YB only lah. Your area is a border line case only, you know or not? If the Malay votes split, you stand a good chance to lose, ok? Go check the latest updates on how solid the Chinese votes will go to the Pakatan people in Batu Pahat please.