I'm planning to go on a drive.

It's a good route with many stories to tell along the way. I had send my very old car for service as it is going to be quite a long drive.

I'm going to start from down town JB along the Skudai road. The recently completed Coastal highway is nice with scenic view of the Tebrau Straits. The several new interchanges make the drive smooth. Not bad compared to a few years back when the stretch was always jammed. Much thanks to the Iskandar Malaysia project which had enabled the development of the road. 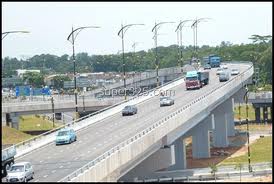 I will exit the Skudai road at the Perling interchange and head towards Pasir Gudang. This is all part of the Pulai parliamentary area. It's MP is that Javanese Teow Chew handsome chubby boy Nur Jazlan Mohamed, a possible future MB of Johor. Honestly, I prefer him to be at the Federal level as he could do well to help PM DS Najib Razak in pushing his moderate policies and 1Malaysia initiatives. Here, he would probably be butchered to death by all those Umno warlords. Anyway,  Jazlan should be good working under Najib's wing. He can manage a bit of Mandarin which should go down well with the Chinese community. He succeeded in doing just that in his constituency. He, however need to cool off a bit his relations with former Pak Lah's people. It's one of those baggage he is still carrying,

Onwards, I never really like driving along the Pasir Gudang Highway. It's always jammed with heavy vehicles coming and going from the ports of Pasir Gudang and Tanjung Langsat. Najib, however had recently announced a huge allocation to widen the highway, which is equivalent to the Federal Highway of the Klang Valley. That will be a really good thing for those living and working along the stretch.

I will exit the Pasir Gudang Highway and join the Jalan Tebrau heading towards Kota Tinggi. At this point, I will be in Tebrau. It's MP is Teng Boon Soon of MCA. Tebrau is one of the Johor DAP targets in the coming general election. I heard DAP had "transferred" several thousands of its supporters to the constituency. MCA there are back paddling, but I am sure Tiram assemblyman Maulizan Bujang and Puteri Wangsa assemblyman Halim Sulaiman would do their best to help Teng. Maulizan and Halim are known not to be the best of friends, but typical of Johor Umno people, when their areas are under threat, they will get together to fight a common enemy.

Jalan Tebrau is now a much better road after several upgrades over the past years. It is wider and has proper interchanges. At one point, I may exit to the new Senai-Desaru Highway which cut down traveling time to the Desaru resort area by more than an hour. It would also take one to the most exciting development area of Pengerang where a mammoth petroleum hub will be build. The Pakatan people are trying to make an issue out of the project but I think the people of Pengerang will not buy it. They would want their area to be developed and that south eastern tip of Johor be transformed from its backwater image.

As I approached the township of Ulu Tiram, the traffic should be smooth as the new flyover across the town had solved what used to be a major traffic congestion at the old junction in the middle of the town. Ulu Tiram is now a rapidly developing township complete with a huge shopping complex and hypermarkets.

On towards Kota Tinggi, the recently upgraded four-lane road should be smooth, almost as good as any proper highway. I guess the JKR people who were responsible for the upgrade have caught on with the good works of their counterparts in Iskandar Malaysia. 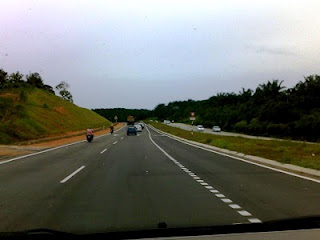 I will bypass the Kota Tinggi town as the main trunk road do not pass through it. Kota Tinggi has Syed Hamid Albar as its MP. Personally, I think the guy should be replaced as he has been there for too long and he had made some bad bo bo when he was a minister. However, Syed Hamid is a good Umno division leader. He take cares of things and make sure his people do not make too much of a mess out of things. So, to tell him to go, one need to be diplomatic lah. I think he would want to go out in a good way too. Oh, by the way, there is nothing to worry about Pakatan people in Kota Tinggi and Pengerang. Support for BN is more or less very solid there.

My drive will proceed to Mersing. Here, the road will become the trunk road of yesteryear. Winding and rather lonely. Not much traffic. I always avoid driving at night from Kota Tinggi northward. The road cuts through several patches of jungle. So at night it will be very dark. I'm always scared that I may ran into a wild boar or other such wildlife. There is also that worry of something going wrong with my old car. There are also of course some ghost stories about the stretch....hehehehe....I don't really believe in ghosts, but still, scary leh.

Nonetheless, I think I will enjoy the rather adventurous drive with funny corners and undulating topography. I would like to take a detour to Pulau Sibu along the way. Never been to that resort island not far off the coast. But that will take too much time.

So, on to Mersing. Will pass the sleepy settlement of Jemaluang. I always wonder how the mostly Chinese residents there survive the boredom of living in such a quiet place. 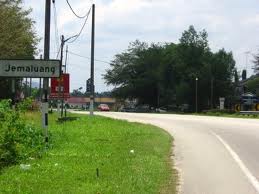 As I reach Mersing, the traffic will be quite hectic again. The town have not developed by very much. Ok lah, there are some new buildings and shop-houses, but the atmosphere is still the same. The big writing of Mersing on top of the hill near the main round-about which look a bit like the Hollywood one has been there for ages. 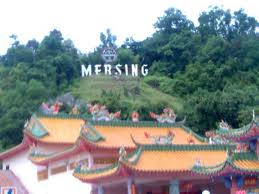 I remember it the way it was when my late father took me to the town when I was a kid. I remember him holding my hand as we walk from the bus station to some government buildings at the edge of the town. Yes, the small town atmosphere is still the same.

Things will however change for the town once the RM22 billion Mersing Laguna resort project kicked off. They said the whole thing will transform Mersing into something like Bali. I guess the people of Mersing should be very excited about it. Well, I'm excited. Maybe I can get a job there....as a traditional dancer probably. :-)

I would like to pause in Mersing for awhile and look across the sea from there. I miss the beautiful Pulau Rawa so much. I haven't fulfilled my promise to return there. I will return there, really.. Hopefully those coins are still there between the cracks of wood at the jetty.... 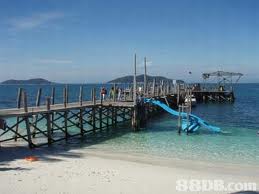 Oh, I think the winding road to Mersing would most likely be straightened and upgraded to accommodate the expected influx of tourists in the years to come. So, no more me pretending to be an F1 driver when driving along the winding road.

Mersing MP Dr Latiff, another potential Johor MB must be very happy with all these development. Anyway, Mersing is another constituency where the Pakatan people do not stand a ghost of a chance to penetrate. Mersing Umno, despite some internal squabbles is still too strong there. Ok, there are some Kelantanese residing in nearby Endau who were said to be Pas supporters, but I don't see them giving much trouble to Latiff.

Onward up north from the Mersing town, I will pass through the beach of Air Papan. 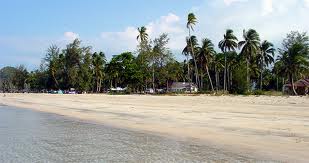 It's the first beach I have been to when I was a kid. My big brother, just came back from his studies in Australia at that time. I remember that he rented a Mitsubishi Gallant and took us brothers and sisters for a two hour drive from our home to the beach. I can still remember the fresh smell of sea on that day. My siblings and me went around collecting seashells and had a little picnic there. Really miss those days when we were young and life being less complicated.

The road to the Endau town is as winding as the one between Kota Tinggi and Mersing. It is mostly jungle by the road side all the way there. I will stop just before crossing the bridge over Sungai Endau in the middle of the small town. That's the Pahang border. 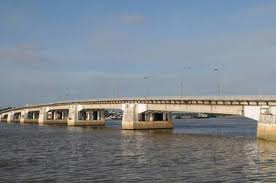 If I have my way, I would want to drive across the bridge and go on northward and never turn back. But my works here in Johor apparently have not yet been completed. Just a short while more, I guess. Need to be patient for a while more. Soon....I will tell myself. With that I will have to turn and head back to JB.
Posted by BIGCAT at 20:22