Just saw a report by Bernama that Pas' fomer Perak MB DS Nizar Jamaluddin is now seeking an audience to apologise to Sultan of Johor. He also said he wanted to explain to the Sultan about his offending twitter posting about the Sultan's WWW1 car plate number.

Well, on Sunday, when told that more than 30,000 Johoreans gathered in support of the Sultan at Istana Pasir Pelangi, Nizar was quoted by NST as bravely saying that he will continue to speak up against anyone, including the royal families on issues which affect public interests. 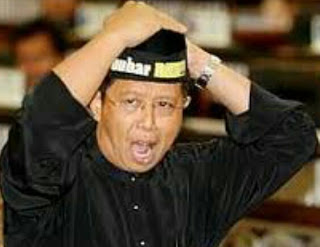 Here are Nizar's quote in verbatim -

"If it is an issue which is totally unimaginable, like irrational spending or behaviour, I will continue to speak up...but I will do it in the most polite manner."

Hmmm...I wonder what makes him want to apologise now.

Personally, I think it's a bit late now for him to say sorry.

The Sultan of Johor was clearly offended, judging by what he said to NST on Sunday. Here is the Sultan's statement about Nizar's initial apology via twitter -

"If he really wants to apologise, he must seek an apology from my people first because he was disrespectful to them.

"He should engage his brain before he shoot off his mouth."

I'm not sure where Nizar got the idea that he can apologise to a Sultan by merely twitting it, but I suspect he may be following the lead of DAP's Penang chief minister Guan Eng who simply issued a statement of apology last year when Sultan of Johor remarked that he was offended when Guan Eng told foreign journalists while in Singapore that Johor is not a safe place.

Guess, only now that these Pakatan leaders are learning that their 2008 electoral gains do not give them the licence to be kurang ajar with just anybody.
Posted by BIGCAT at 17:53