So, PKR wonder boy Rafizi said he stepped down from his post in the Selangor government because he wants to concentrate on party work with the election around the corner. So noble of him.

He also said his resignation got nothing to do with the power tussle between MB Khalid and Azmin Ali. Yea, right.

The thing with the Pakatan people is that they are good at hidding their own petty internal politics. And the best part of it, people tend to believe them.

Umno and the gang on the other hand are all too willing to go public with their squabbles. All in the name of transperency.

It's exactly the same case with pro-Umno and BN blogs and newsportals as compared to those on the other side of the political divide. BN cyber gang almost always never shy from writting about issues deemed negetive about the caolition. The Pakatan side on the other hand are as devious as rats when something blew up on their side. Anyone ever see pro-DAP blogs posting about the hillside destruction on Penang island? 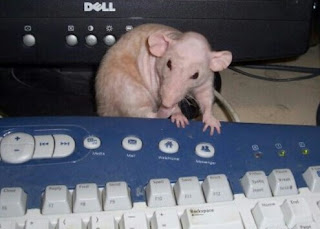 You could hardly see Pakatan blogs and websites attacking any wrong doings of their political masters. They  talk so much about freedom of these and that yet their practices were completely heading the other way around. Prime example is Guan Eng lah. Now, not even the usually pro-DAP Chinese Press people are spared his tantrums if they write something not so pleasant about Guan Eng such as that beautiful rainbow episode.

Guess, that's how it will be once Pakatan takes over Putrajaya. No more simply simply talk. Sure kena sue one. Me - I will blog about food and fashion once Pakatan rule this country. Not worth it to take the risks leh. Now under BN can still fool around a bit. BN can cin cai cin cai la with these sorts of thing. I'm going to enjoy it while it lasts.
Posted by BIGCAT at 21:46