So, Pas-ruled Kedah is moving ahead towards theocracy, surging even ahead of Nik Aziz's Kelantan.
Now, all fatwa issued by the Mufti and fatwa council in Kedah can't be objected.

Here is a bit of the story from The Star :

ALOR SETAR: Future fatwa issued by the Kedah mufti or Fatwa Committee cannot be challenged in court under an amendment to the Mufti and Fatwa (Kedah Darul Aman) Enactment 2008 passed by the Kedah State Assembly on Tuesday.
A new section - Section 22A - inserted in the enactment states that a fatwa decided by the mufti or Fatwa Committee, whether gazetted or not, cannot be challenged, appealed, reviewed, denied or questioned in any civil court or syariah court.
The insertion was among the amendments passed unanimously by the House on Tuesday.
In tabling the bill for the amendments, Mentri Besar Datuk Seri Azizan Abdul Razak said it was to clarify the membership of the Fatwa Committee and to give conclusiveness to any fatwa decided by either the mufti or Fatwa Committee.

That one even got the extremely pro-Pakatan Bar Council screaming bloody foul. Now they know lah what Pas is all about.

More to come I am sure. Just wait till they all take over the federal government.

Do all those smart lawyers of Bar Council anticipated this when they throw their support behind Pas and their allies? I think they do/ Just that they were so blinded with arrogance and hatred that they tried to ignore the obvious about those Taliban wannabes. 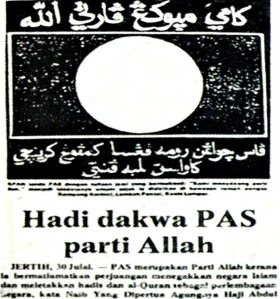 Well, you reap what you sow.

At the time I'm writing this, I haven't heard anything yet from DAP and PKR about the issue. I think they are really in a tight spot on this one. Probably laying low until things blow over.

This is when Guan Eng's media banning comes handy. See no evil, hear no evil, speaks no evil.

Well, even if they say someting against Pas on this one, what would be the effect?

I'm quite sure Pas will not back off from this. They have to stand their ground or risk being seen as a lame duck partner in Pakatan.

I'm really looking forward to what Nik Aziz has to say about this one. Would he sacrifice whatever little credibility Pas still have as an Islamic party  or would he value the non-Muslims votes more?
Posted by BIGCAT at 21:56