For dinner we went out to have some congee at a quite nice Chinese restaurant. He said it's ok, no pork there. So, he ordered la. One side dish looked quite delicious. What is it? He said "Oh, that one very nice, frog legs fried with chili. Err, don't tell me you can't eat frog legs..." Siow la!!!

Well, I'm not a religious expert but I know as a Muslim I can't eat pork, and meat of dog, predatory animals, those which are poisonous, amphibians....errr, maybe all ugly looking mamals.

I can eat everything with gills except those which are poisonous.

I can eat grasshoppers.

I'm not sure if I can eat panda...or elephant.

Another Sunday...I'm always lazy on Sunday. Feel like sleeping off the whole day. But, got to see him today. He said he wants to cook lunch for me. So romantic and all, but looks like I have to bring over my pots and pans to his place. I suspect he still cooks pork in his kitchen. So don't want to use his stuff. I don't think I will ever get used to his pork eating and hope he quit one day. His excuse has always been that "I'm Chinese la...must eat pork leh."

Whatever lah...but really, he never even seen a live pig, let alone been to a smelly pig farm. Looking at the animal, I don't know how anyone could eat it. 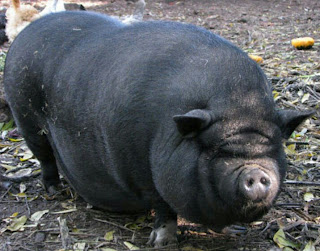 See, how can we eat an animal which looks like a lawyer ? Don't be angry arrr...really, just look at the face of the pig. Doesn't it reminds you of one particular lawyer?

Hmmm...btw, BN seems to be on the offensive of late. A lot of statements about Anwar's wheelings n dealings. Anwar's defence remains the same - Muhyiddin asked about my Rm3 billion? Tell him to declare his assets instead. These are all Umno's conspiracy!!!!

Real babi la that sorts of excuse. You explain first la about the Rm3billion, before accussing others of corruption.