A pledge of loyalty

Over 30,000 people turned up at Istana Pasir Pelangi today to pledge support for Sultan of Johor. The organiser had initially expected about 6,000 people.

Personally, I never expected so many to turned up myself. Guess, the Johor royalty still command a huge support from the rakyat.

This is something people like Nizar Jamaluddin never expect when he tweeted that disrespectful remark about the way the Sultan uses his money. Anyway, I don't think it's so much as about the Sultan's spending which prompted Nizar's remark but rather the opportunity for him to run down the institution itself.

People like Nizar seems to think that the institution of Malay Rulers is a stumbling block to their attempt to change the status quo which prevented them from obtaining power. That is why they deem it necessary to incite the people against the Rulers by way of highlighting what little perceived faults of the royalty.

I'm not saying the people should not questioned the conducts of the Rulers at all, but they should do so with due respect for the institution which serves as the protector of the people.

I had myself posted in this blog some reminders to members of the royal institution on what they need to avoid in order to maintain the people's respect. I had done so subtly and with due respect for the Rulers. I came to understand that my effort had not been in vain. The Rulers do appreciate feedbacks from the rakyat as they are not the arrogant creatures that people such as Nizar tried to portray. 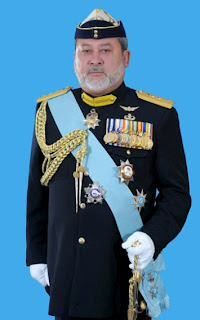 As a Johorean, I would like to record my pledge of loyalty here today for my Sultan, Sultan Ibrahim Sultan Iskandar. May Allah bless him with the wisdom and good qualities of a Ruler. Daulat Tuanku.
Posted by BIGCAT at 21:24