A source within Guan Eng's office had informed me that efforts to turn the Penang Chief Minister's image to be as "cool" as PM Najib had recently hit a snag.

After the success of changing his hairstyle which previously was deemed to be too old fashioned due to the overuse of haircream, Guan Eng's staff had went further by trying to change his preference of music. Yes, they tried to introduce to him KPOP, the Korean music phenomenon which is the craze among potential young Chinese voters at the moment. 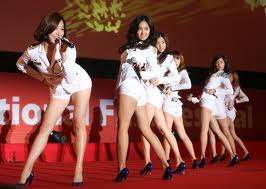 Guan Eng's staff told him that the image of a KPOP music lover will go well with his new stylish layered haircut which was given rave review by Jocelyn Tan of Star in her recent article.

Following a week of trial run, Guan Eng told his staff that the plan had to be cancelled. He said that the rather upbeat Korean music is not suitable for his fulsome family man image.

Guan Eng's cup of tea
(try to watch the attached video clip till the end)
Posted by BIGCAT at 12:55